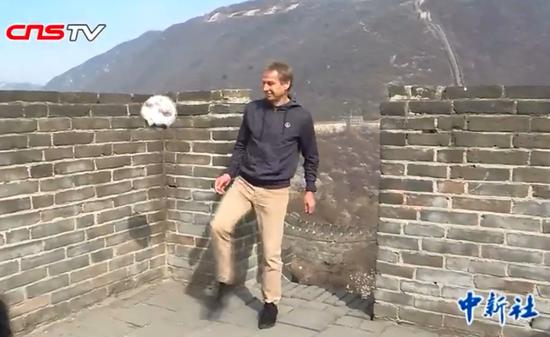 Jurgen Klinsmann, the German football manager, pundit and former player shows off skills on the Great Wall. (Photo/Screenshot on CNSTV)

(ECNS) -- While on a visit to Beijing, Jurgen Klinsmann, the German football manager, pundit and former player, said he would not exclude the possibility of becoming the head coach of China’s national team.

Bundesliga International has opened a new China office in Beijing, with the 1990 World Cup winner making a tour as a special guest from April 12 to 14.

Klinsmann said experiences in playing football cannot be simply repeated in different countries, noting that China and Germany have many differences in training and leagues.

He also said the United States has made new developments in football in recent years, paying more attention to the 18-to-20 year-old age group.

Responding to a question about how to improve China’s football performance, Klinsmann stressed people cannot make good decisions without a sound understanding of the development of football in a country.

He said it was his first trip to Beijing and he has limited understanding of Chinese culture, the Chinese Super League and Chinese coaches and players, so he is unable to give an easy suggestion.