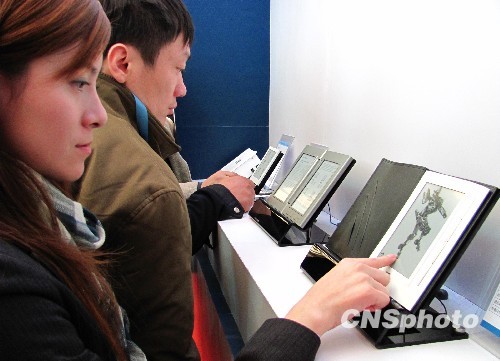 (ECNS) -- Chinese people on average read 12.4 digital publications in 2018, taking an average 71.3 minutes, according to a report released at the Digital Reading Conference China 2018 in Hangzhou City.

With the development of information technology, digital reading has become increasingly important, the report said.

In addition, many educational platforms have also cooperated with digital publishers to reach more users.

Feng Shixin, a deputy director in charge of publication at the Publicity Department of the CPC Central Committee, said digital reading had experienced a rapid boom in China, enriching people’s reading choices.

Featured at the event were digital reading developments and technology, including the application of artificial intelligence in digital publishing, webcasting, and audio reading.

Also on display for visitors to experience at the event, augmented reality (AR) devices allowed books to be read like never before. For example, a picture book of China's first emperor, Qin Shihuang's Terracotta Army, read with the aid of AR, allowed life-size figures of warriors and horses to appear in front of a reader's eyes.