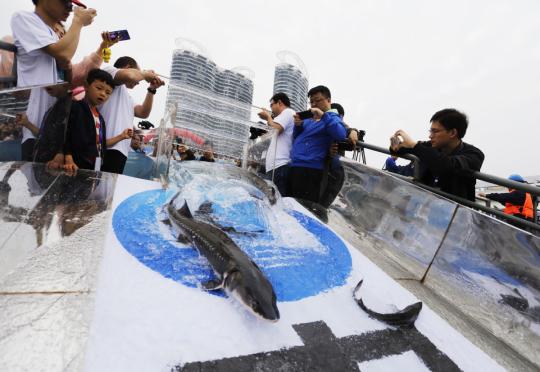 Rare Chinese sturgeons are released into the Yangtze River in Yichang, Hubei province, on Saturday. They are part of China's first batch of 700 such sturgeons trained for rewilding. (Photo for China Daily/Huang Yuyang)

China's first batch of 700 Chinese sturgeons trained for rewilding was released into the Yangtze River on Saturday in a bid to boost the population of the endangered species sometimes referred to as the "aquatic panda".

The captive-bred sturgeons were sent into the wild in Yichang, Hubei province, by the Chinese Sturgeon Research Institute of China Three Gorges Corp.

"Before their release, the sturgeons were trained in pools that simulated the environment of the wild. And they have two major tasks－catching live food and swimming upstream," said Li Zhiyuan, deputy director of the institute.

The training scheme－the first of its kind for the Chinese sturgeon－took half a year to prepare, Li said.

The sturgeons, which were used to an artificial diet of dead fish, had to learn to catch and eat live fish, shrimp and shells that were placed in a pool. The pool was also lined with stones and silt, creating an environment similar to that of the Yangtze River.

For most of their lives, wild Chinese sturgeons live in the ocean. But they swim more than 3,000 kilometers and return to the river during mating season.

"So, we also trained them to swim upstream. It is another basic skill they need for reproduction," Li said.

After months of training, he said the sturgeons are adapting to the simulated environment.

Chinese sturgeons are a top-level protected species in China. Their origins can be traced to the age of dinosaurs. Researchers at the institute succeeded in artificially inseminating and spawning cultured Chinese sturgeons in 1984.

About 5 million captive-bred sturgeons have been released into the Yangtze River so far to save the species from extinction.

The 700 sturgeons sent into the wild on Saturday include both young and adult sturgeons of relatively large sizes to enrich the species' population using different age groups.

To boost the survival rate of the species in the wild and enhance genetic diversity, more male sturgeons were released to adjust gender imbalance. Thirty male adult sturgeons were selected based on genetics.

It takes a long time for a Chinese sturgeon to reach sexual maturity, usually about nine to 12 years, Li said. Also, their sex is hard to distinguish by outward appearance, which had become a major challenge in gender selection for artificial reproduction.

"Now, we can successfully select the gender when the sturgeons are 2 years old," he said, adding that those 30 males are all big ones with an average length of 2 meters and weighing about 50 kilograms each.

Advanced sonar systems capable of working for 10 years are attached to some of the fish in this batch. Scientists will study the data collected through sonar techniques to learn more about the migration and reproduction patterns of sturgeons.