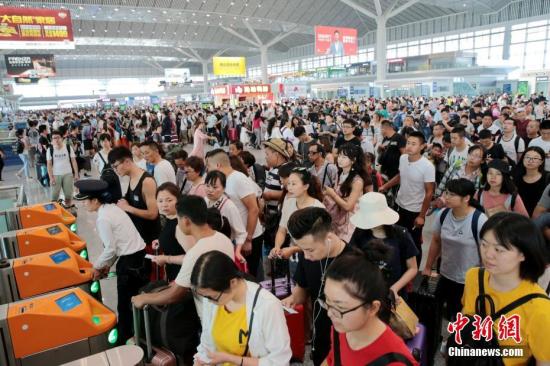 (ECNS) - China Railway Corporation (CRC) has taken a slew of measures to raise capacity and improve services in response to heavy summer traffic.

A new rail line began operation Sunday in southwestern Yunnan Province, linking capital Kunming with Dali, a tourist city known for its scenery, cutting the travel time between the two cities from more than five hours to two hours. It means the western part of Yunnan is now linked to the national high-speed railway networks.

More high-speed trains will also be operational on weekends and during festivals thanks to more flexible train schedules, according to CRC.

To support trade and the movement of people between northeastern and southwestern regions, a new high-speed train between Shenyang in Liaoning Province and Chengdu in Sichuan Province is set to begin services. Railway authorities in Xi'an have also launched bullet trains to popular tourist destinations like Chengdu, Chongqing, Tianshui and Jiayu Pass.

Regional railway bureaus have advocated for distinctive trains to meet the diverse needs of travelers. Harbin, for example, is opening tourism trains to Heihe, Yichun, Fuyuan, Hailar and other cities during the summer travel period.

CRC has also improved transport efficiencies between key metropolises. Trains on the Nanjing-Wuhan and Liuzhou-Nanning rail lines will now run at a speed of 250 km/h, and train travel time between Wuhan and Shanghai has been further reduced to three hours and 51 minutes at most.