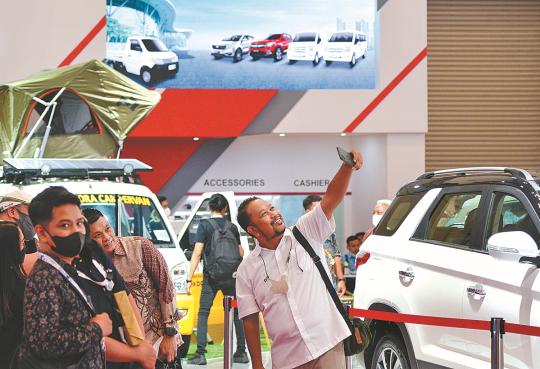 A visitor takes a selfie at an automobile exhibition showcasing vehicles made by Chinese manufacturer Dongfeng Xiaokang in Tangerang, Indonesia, in August. (Photo/XINHUA)

Palm oil and other products in its seven factories are forecast to have a total value of 1.6 billion yuan ($230 million) this year. Of that, palm kernel oil and meal worth 300 million yuan are expected to be exported to China, and the rest will be sold on the Indonesian market, said Lei Wenzhong, CEO of the company's Indonesian branch.

According to China's Ministry of Foreign Affairs, China and Indonesia's bilateral trade surged to $124.43 billion in 2021, increasing nearly 60 percent on a yearly basis.

"Thanks to the stronger bilateral ties between China and Indonesia, confidence of Chinese investors in Indonesia is growing, which in turn adds impetus to the economic and trade cooperation between the two countries," Lei said.

As the world's fourth-most-populous country, Indonesia has not only rich resources but also a huge market for Chinese enterprises to tap mutually beneficial investment and trade cooperation, he added.

Xu Ningning, executive president of the China-ASEAN Business Council, said cooperation between the two countries has provided valuable wisdom for not only the region but also the world to cope with the ongoing challenges and complexities.

Indonesia ratified the Regional Comprehensive Economic Partnership agreement on Aug 30 and the agreement will take effect in the country within the year. According to Xu, that will enable the country to receive more investment in downstream industries, particularly in the commodity processing sector.

Zhou Mi, a senior researcher at the Chinese Academy of International Trade and Economic Cooperation in Beijing, said China and Indonesia have huge cooperation potential in industrial and supply chain coordination, infrastructure construction and e-commerce development, as they have differentiated supply and demand advantages.

Experts also said the two need to further deepen Belt and Road cooperation and ensure good implementation of major cooperation projects — for example with the high-standard construction of the Jakarta-Bandung high-speed railway — and to step up cooperation in the health and pharmaceutical industry.

Chinese vaccine maker Sinovac Biotech said Indonesia was one of the first countries to approve its COVID-19 vaccine, and the company has been supporting large-scale vaccination programs in Indonesia since then.

China's Abogen Biosciences said it plans to build a joint venture in Indonesia with the Indonesian biotech company Etana to tap the country's pharmaceutical market and accelerate its going-global strategy while at the same time helping Indonesia upgrade its biomedicine industry.

The company has already transferred the manufacturing technology of its mRNA COVID-19 vaccine to Etana. That makes Indonesia one of the few countries able to develop high-end pharmaceutical products via the mRNA technology.