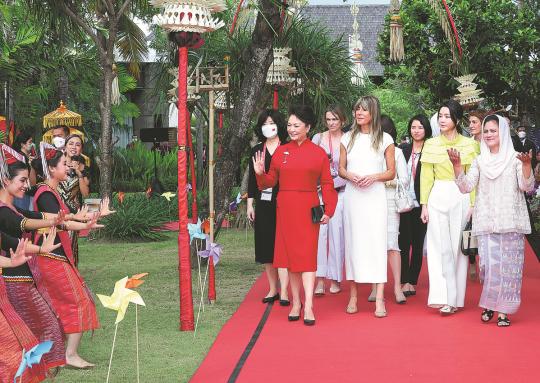 Peng Liyuan (center), wife of President Xi Jinping, greets performers of a local dance show as she walks with other leaders' spouses at the G20 Summit Spouse Program in Bali, Indonesia, on Tuesday. (Photo/XINHUA)

Peng Liyuan, wife of President Xi Jinping, joined an event for the spouses of leaders attending the Group of 20 Summit on Tuesday morning in Bali, Indonesia, and voiced hope for strengthened cooperation between China and Indonesia.

Upon arrival, Peng was warmly welcomed by Indonesian first lady Iriana Joko Widodo, the organizer of the event, and posed for a picture with her.

Peng watched a local dance show with other leaders' spouses, and posed for a group photo with the sea in the background.

Accompanied by the Indonesian first lady, Peng visited an exhibition of local musical instruments, garments, rattan work, embroidery and food, and participated in palm-frond weaving. Peng printed the logo of the G20 Bali Summit and the flower image of the event on a woven bag.

She said China and Indonesia can strengthen exchanges and cooperation in those fields to contribute to regional efforts to alleviate poverty and protect the environment by developing relevant industries.