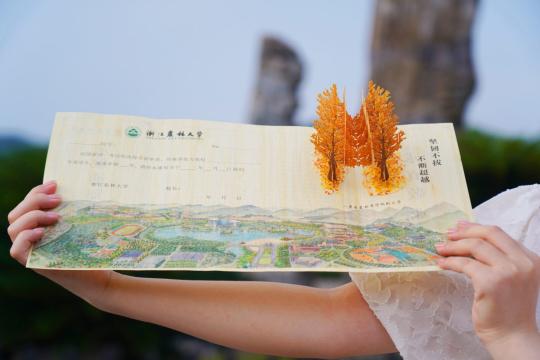 When newly admitted college students receive their letter of admission this summer, they may get more than just a mundane letter. They may also get surprise gifts, such as lotus seeds, microchips or even Morse Code messages that express a university's welcome and best wishes.

Gao Fanqiao, 18, a high school graduate from Shenyang, Liaoning province, was looking forward to her admission letter from Nankai University in Tianjin. It arrived with two lotus seeds.

"I will give one of them to my high school and take the other with me to my long-awaited university," Gao said.

The special meaning that the university wants to convey via the lotus seeds is that the plants, which depict noble qualities in Chinese art, are used to symbolize the school's desire that students keep their original aspirations and march toward a bright future.

The admission package, which included a letter, seeds and a bookmark, fulfilled the dream she's had since her senior high school year of attending Nankai University.

Many domestic universities have joined the craze of sending fancy surprises and fabulous admission packages in recent years to give students an amazing first impression and impress family and friends.

"It is hoped that the freshmen will always keep in mind that their university has been adhering to the country's rural vitalization strategy, so they can make contributions to places where they are needed in the future," Zhang Zhe, a university staff member, was quoted as saying by media. He has taken a temporary post in the county－one of many moves by the university to help boost rural prosperity.

Another novel certificate of admission is from Harbin Institute of Technology in Heilongjiang province, which is rimmed with diamonds or sapphires, expressing the hope that the freshmen will embrace shining achievements in the future.

A recipient who opens their admission letter from Zhejiang Agriculture and Forestry University in Zhejiang province, will see a three-dimensional ginkgo tree figure in the top right corner, made of bamboo, symbolizing the school's ecological culture.

Other innovations from different schools include paper cuts to show the charm of traditional Chinese culture, and coded messages to stimulate students' curiosity.

"I think the letters carry the wishes of the universities. It's not for showing off, but to give encouragement and warmth to students like my daughter," said Gao's father Gao Wei.