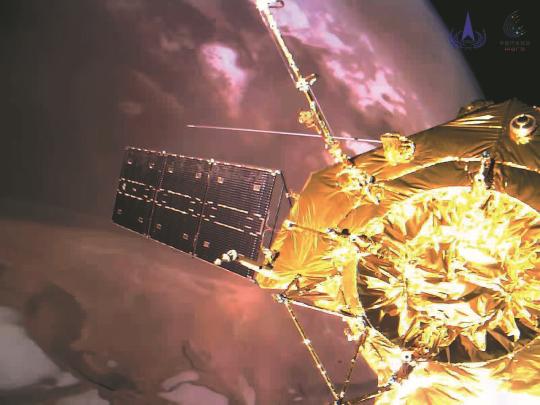 A photo sent back to earth by Tianwen 1 on Jan 1. (XINHUA)

Aiming at the sun

Following the moon and Mars, China has set its exploratory sights on the sun, the core of our solar system.

In mid-October, the country launched its first solar observation satellite, aiming to deepen scientists' knowledge of the star.

The 508-kg Chinese H-Alpha Solar Explorer satellite was launched by a Long March 2D rocket from the Taiyuan Satellite Launch Center in Shanxi province, before entering a sun-synchronous orbit, about 517 km above Earth.

The mission is expected to provide scientists with the first high-quality observation data of the source area of a solar eruption and will improve China's research capability in solar physics, according to program officials at the administration.

Wang Wei, the satellite's project manager, said it is China's first space-based solar telescope and is designed to work for at least three years.

"Scientifically speaking, the H-alpha imaging spectrograph on the satellite is able to observe and record changes in the sun's physical elements, such as temperature and speed, facilitating scientists' studies of dynamics and physics during a solar eruption," he said.

Zhao Jian, a senior official in charge of the satellite program, said it is important to study the sun because solar activities have many effects on life on Earth.

Studying the sun also allows scientists to deepen their research on the origins and evolution of celestial magnetic fields, the acceleration and distribution of energetic particles and other physical phenomena, he said.