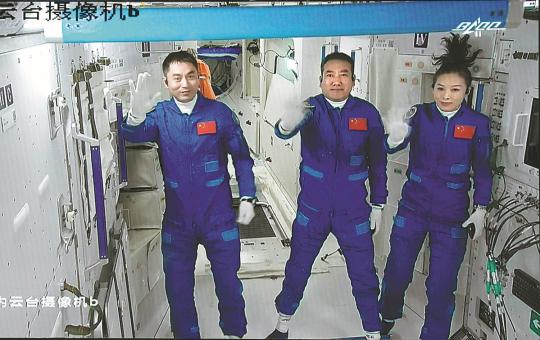 Astronauts (from left) Ye Guangfu, Zhai Zhigang and Wang Yaping, the crew of Shenzhou XIII, wave during a video from the Tianhe core module in October. (TIAN DINGYU/XINHUA)

Tiangong is now occupied by the crew of Shenzhou XIII－Major General Zhai Zhigang, Senior Colonel Wang Yaping and Senior Colonel Ye Guangfu－who arrived at the station in mid-October and are scheduled to stay there for six months.

In their first spacewalk in November, Wang became China's first female spacewalker. The 41-year-old performed extravehicular operations that lasted six and a half hours along with mission commander Zhai.

Last month, the astronauts gave a space-based science lecture to tens of millions of primary and middle school students nationwide. They also made their second spacewalk.

According to the schedule of the China Manned Space Agency, the crew will finish their tenure around mid-April and then return to Earth.

To continue construction of the Tiangong station, two large space labs will be launched this year to connect with the module. Moreover, the Shenzhou XIV and XV manned missions and two robotic cargo flights will also be undertaken and will dock with Tianhe, carrying astronauts for shifts and ferrying supplies and mission payloads.

Following the Shenzhou XIII mission, Tiangong will be manned regularly by three-strong groups of astronauts in six-month shifts.

During handovers to new groups, the station will accommodate as many as six astronauts.

Hao Chun, director of the China Manned Space Agency, said his team's goal is to ensure that the best use will be made of the station to advance space science, technology and applications.

He also said that China is open to cooperation with foreign nations in the space station project, adding that after the Tiangong station starts formal operations, there will be more than 20 cabinets onboard reserved for international-standard scientific instruments.