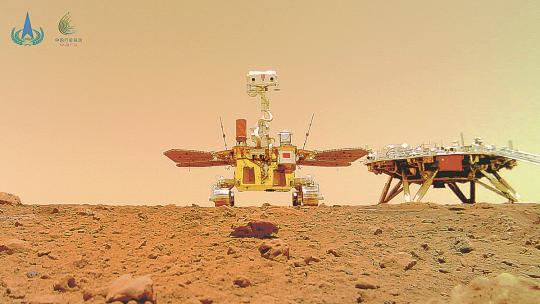 Tianwen 1 has completed the scheduled tasks for the world's 46th Mars exploration mission, but the Zhurong rover continues to work on the planet's surface. (XINHUA)

After deploying a robot on the far side of the moon and bringing fresh lunar soil back to Earth, China achieved its newest feat in deep-space exploration by placing a rover on Mars.

On May 15, Zhurong, named after a Chinese god of fire, was released from the Tianwen 1 robotic probe and pierced the Martian atmosphere in an extremely risky landing procedure.

It quickly touched down safely on the southern part of Utopia Planitia, a large plain on the Red Planet.

On May 22, Zhurong left its landing platform and traveled on the Martian soil, becoming the sixth rover on Mars, following five predecessors from the United States.

The 1.85-meter-high, 240-kilogram rover has now worked on the Martian surface for more than seven months－far outliving its three-month life expectancy.

It has traveled more than 1.4 km and transmitted a number of video clips and photos taken en route for its destination, an ancient coastal area on Utopia Planitia.

Tianwen 1, the nation's first interplanetary exploration endeavor, was launched on July 23, 2020, from the Wenchang launch center.

It was the world's 46th Mars exploration mission since October 1960, when the former Soviet Union launched the first Mars-bound, albeit unsuccessful, spacecraft.

The Chinese craft consisted of two major components－the Zhurong rover and an orbiter. It traveled more than 470 million km and carried out several maneuvers before entering Martian orbit on Feb 10 last year.

Before releasing Zhurong for its landing, the Tianwen 1 probe circled Mars for more than three months, mainly to collect information about the rover's planned landing site for ground controllers to analyze and make decisions.

There are three operational rovers on the Red Planet－Curiosity and Perseverance of the US and China's Zhurong.

In the Martian skies, the Tianwen 1 orbiter is traveling in an orbit to conduct remote-sensing and signal-relay operations.

The mission has obtained nearly 540 gigabytes of data and transmitted them back to Earth, according to mission controllers at the China National Space Administration.

They added that the rover and orbiter have plentiful energy resources and are in good condition.