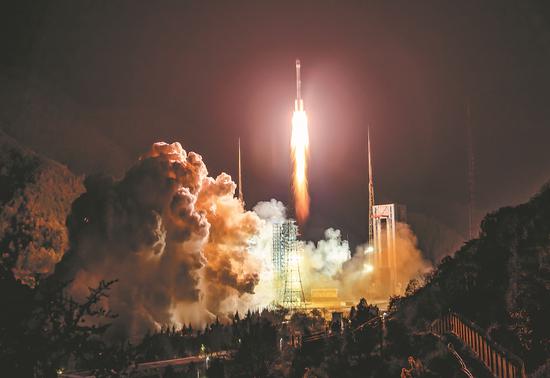 Last year was China's busiest in terms of orbital launches, topping the global list of rocket liftoffs for the third time.

Early on the morning of Dec 30, a Long March 3B carrier rocket roared into life at the Xichang Satellite Launch Center in Sichuan province, transporting the Communication Technology Demonstrator 9 experimental satellite into a geosynchronous orbit.

As a result of the Long March family's frequent flights, China became the year's biggest user of carrier rockets, with 55 orbital launches, while the United States launched 45 rockets, ranking second in liftoffs.

Also last month, the Long March family hit its 400th flight mission, with a Long March 4B rocket lifting off from the Jiuquan Satellite Launch Center in the Gobi Desert in the country's northwestern region.

In April 1970, China launched its first carrier rocket－a Long March 1 that was based on a ballistic missile－to send its first satellite, Dongfanghong 1, or The East is Red 1, into space. The mission made China the fifth country capable of building and launching its own carrier rocket capable of reaching Earth orbit.

Since then, the country has developed and launched more than 20 types of Long March-series rockets, with about 15 types still in active service.

Chinese engineers are designing many new types of carrier rockets, including a super-heavy model tasked with carrying the nation's astronauts to the moon.