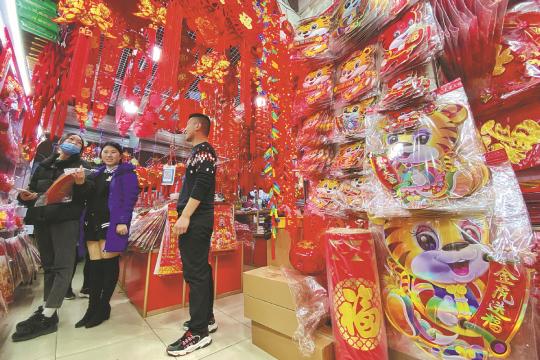 Merchants sell New Year's Day and Spring Festival decorations at a wholesale market in Jinan, Shandong province, on Dec 7. With the holiday season on the horizon, China's consumption market is expected to scale another peak. (Photo/China Daily)

Despite odds, 2022 may help sustain sales boom in both urban and rural areas in the country

With New Year's Day and Spring Festival on the horizon, China's consumption market is expected to scale another peak, industry observers said.

More than others, catering and food sectors are expected to boom despite some challenges brought by the COVID-19 pandemic, they said.

The fourth quarter of this year has seen consumption in China peak, and the uptrend spread to some sections of the capital market as well.

In October, November and early December, shares of many companies in sectors like food, beverage and daily necessities rose.

"Some sporadic COVID-19 cases in a few Chinese cities led to stricter government management. Coupled with the Beijing 2022 Winter Olympic Games from Feb 4 to 20, the population flow in some cities could be limited in the early part of the new year, which might affect the consumption market," said Fu Yifu, a senior researcher at the Suning Institute of Finance.

"Still, there is unceasing demand from consumers for necessities for the New Year and Spring Festival celebrations, and this is expected to boost the market," Fu said.

China Merchants Fund said sales of Chinese white spirit or baijiuare expected to increase with the holidays drawing near, as the scenarios of gifting and social gatherings are foreseen to become more frequent. Particularly, high-end spirits have seen a new round of price rises recently. The 2022 Spring Festival holiday will begin on Jan 31 and last till Feb 6, and Spring Festival itself will be celebrated on Feb 1.

"Some white-horse shares with high brand value and potential will continue the growth uptrend in the long term. For instance, the climbing share price of Kweichow Moutai definitely gave a boost to many white-horse stocks. China's sustained supply-side reforms and consumption upgrade trend have boosted investor sentiment toward such consumer stocks," Yang said.