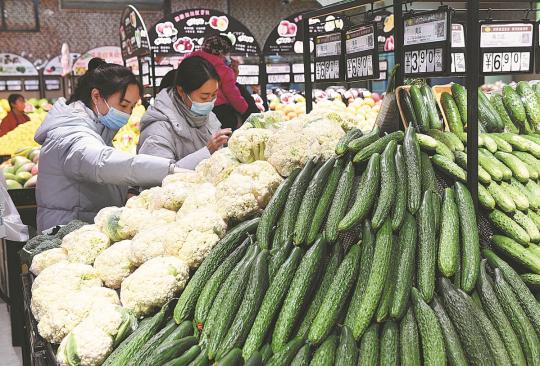 Consumers pick vegetables at a supermarket in Xinle, a county-level city of Hebei province, on Dec 9. The fourth quarter of this year has seen consumption in China peak. [Photo by Jia Minjie/For China Daily]

For Spring Festival earlier this year, city-level governments encouraged residents to stay at home rather than head to their hometowns. To be sure, the measure helped rein in the spread of the novel coronavirus. But, it also dented consumption, particularly in the catering and transportation sectors.

With the pandemic increasingly coming under better control and vaccination rates rising in China, the consumption market is foreseen to continue its recovery next year. What's more, the consumption structure and categories will continue to upgrade, experts said.

"The government's mature and calm response to the pandemic will help Chinese consumers to restore their confidence and increase their spending. The consumption upgrade trend in the country won't change, and consumers are expected to show more sophisticated demand in pursuing goods and experiences of higher quality," Fu said.

Earlier this month, the Political Bureau of the Communist Party of China Central Committee held a meeting and called for stabilizing the macroeconomy and keeping economic growth within a reasonable range. The top meeting also called for continuously expanding domestic demand and promoting the recovery of the consumption market.

Under the new dual-circulation development pattern, where the domestic circulation serves as the mainstay while the domestic and international circulations reinforce each other, China is committed to building a more market-oriented and world-class business environment, and consumption is playing a more important role than ever in driving economic growth.

In the first 11 months of this year, China's total retail sales of social consumer goods increased by nearly 14 percent year-on-year to 39.96 trillion yuan, according to the National Bureau of Statistics.