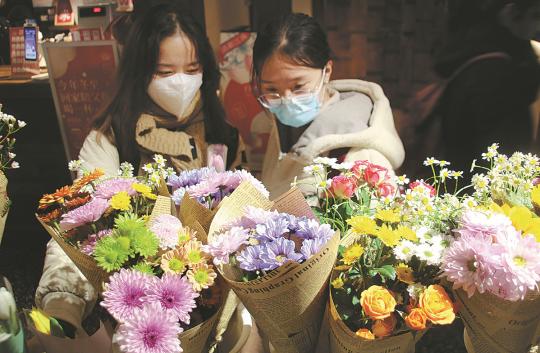 He also said that even though people's movements may be limited during the Spring Festival holiday in February, its negative impact on the consumption market could be less severe than that seen during this year's festival period, as the pandemic prevention and control measures have been more scientific and mature this year.

Next year, new types of consumptions, especially online shopping, are foreseen to continue their boom. Ever since the pandemic broke out, online shopping has played a critical role in supporting the market's recovery, and many local governments have introduced favorable policies to support online retailing.

"Digital technologies like 5G and artificial intelligence are spawning a large number of new scenarios and business formats in various sectors. They are also playing an important role in supporting high-quality development. China should continue to improve the building of information infrastructure," Fu of the Suning Institute of Finance said.

Besides, Chinese brands are foreseen attracting more young consumers. As the pandemic made the entire international situation uncertain, Chinese people stood united to fight the pandemic together. It has also helped strengthen people in China as a cohesive force with a distinct national identity, and thus more consumers have shown a higher recognition of domestic brands such as leading Chinese sports brands Li-Ning and Anta, Fu said.

Meanwhile, China is cultivating a group of distinguished international consumption cities such as Shanghai. As China is fostering the dual-circulation development paradigm, domestic cities find themselves as hotbeds of commercial activities.

"It is necessary to continuously improve the consumption environment in Chinese cities and help them attract more premium global brands. Next year, more measures are expected to be implemented to improve the building of international consumption cities," Fu said.

Earlier this month, the Ministry of Commerce and other authorities concerned jointly released a guide for commercial constructions at the county level. This was to complement construction activities in cities. The guide said by 2025, China would build a comprehensive county-level commercial network and system, with counties serving as the core and villages and towns serving as key areas.

The government will help upgrade daily consumer goods that rural residents use and encourage more rural retailers to cooperate with companies that own well-known brands to further grow their businesses.