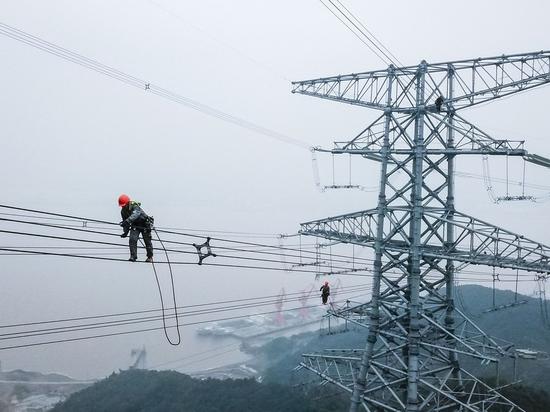 Analysts: Third-quarter GDP growth likely to come in at around 5 percent year-on-year

Key indicators to be unveiled on Monday are expected to show the mounting headwinds facing China's economy, underlining the necessity for policymakers to ramp up support for smaller businesses, experts said on Sunday.

China's GDP growth in the third quarter of the year, to be released by the National Bureau of Statistics on Monday along with other economic indicators, is expected to come in at around 5 percent year-on-year, down from 7.9 percent in the second quarter, they said.

The slowdown can be attributed to transitory factors including heavy rainfall, the biggest wave of domestic COVID-19 cases since the initial outbreak and restrictions on power use and industrial production, as well as longer-term issues like elevated commodity prices amid global stagflation concerns.

"Intensified cost pressure has made it increasingly more urgent to ramp up policy support to safeguard the stable operation of hard-hit, smaller businesses," said Tang Yao, an associate professor of economics at Peking University's Guanghua School of Management.

Wang Tao, chief China economist with UBS Investment Bank, said China's third-quarter GDP growth may have slowed to 5 percent on a yearly basis, due to the COVID-19 resurgence, power supply problems and the property sector slowdown.

China's economy is likely to regain some momentum amid efforts to boost power supply and a more stable epidemic control situation, but structural problems like elevated commodity prices and lukewarm domestic demand may continue, experts said.

"It is possible that quarter-on-quarter growth momentum may rebound in the fourth quarter," Wang said. "But we do not expect fourth-quarter growth to be stronger than the third one on a yearly basis, with property construction and property investment slowing further."

Smaller businesses may continue to face the difficulties brought by elevated cost pressure amid tight global commodity supplies and uncertainties in market demand, as domestic household income is hampered by the COVID-19 pandemic while the country's strong export growth has shown signs of slowing, said Tang from Peking University.

"It is therefore likely that the Chinese central bank will further leverage structural policy tools such as relending facilities to ease the cash woes facing small businesses, as well as to boost clean energy investments," he said.

Tang added that infrastructure investment may steadily speed up and play an important role in stabilizing demand in the coming two or three quarters, offsetting a possible softening in exports and property development.

Kang Yong, chief economist at KPMG China, said the Chinese central bank may reduce the cash some banks must hold in reserve, to support smaller businesses and stabilize employment, adding that he estimates the Chinese economy will grow 4.9 percent year-on-year in the third quarter and 8.2 percent in the full year.