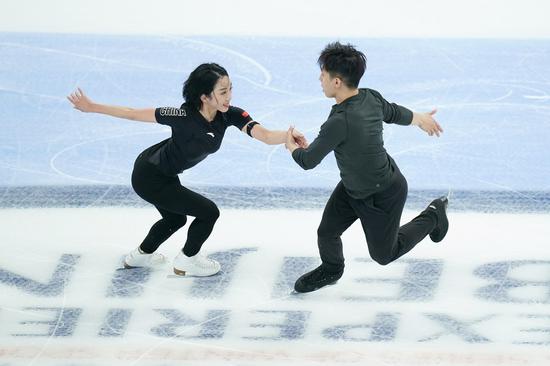 With figure skaters from nine countries and regions taking to the ice at the Capital Gymnasium in Beijing for warm-up sessions on Wednesday, the second event of the Beijing 2022 test series got underway.

Although the three-day competition of the Asian Open Figure Skating Trophy 2021 officially begins on Thursday, the all-element test of the 53-year-old Capital Gymnasium has already kicked off.

Ding Dong, the operation director of the Capital Gymnasium, told media that the gymnasium has not hosted any sports competitions since November 2017 when the ISU Figure Skating Grand Prix China leg was held here.

"In a sense, for all the Chinese and foreign skaters attending Beijing 2022, this ice rink is unfamiliar," Ding said. "The competition this time is up to the Olympic standard."

The Capital Gymnasium will be the venue for figure skating and short track speed skating at Beijing 2022.

"The gymnasium, built in 1968, has witnessed many key moments of Chinese sports. It was a venue for the Beijing Asiad in 1990 and the Beijing Summer Games in 2008. And it will be one of the gymnasiums in Beijing to host both Summer and Winter Olympic competitions," Ding said.

In Beijing 2022, the Capital Gymnasium will be one of the most-watched venues for home fans, as China has several world top-class athletes in figure skating and short track speed skating.

"The Chinese national figure skating team has sent 17 athletes to compete in the Asian Open, which means the whole team will show up in the Capital Gymnasium," Ding noted.

Ding admitted that the pandemic prevention in the Capital Gymnasium compound is the most severe challenge as it's old and close to the downtown area.

"We have done a lot of renovation work and added some hi-tech elements. We have a 2,000-strong operation team, one third of whom work in the closed-loop," he said.

"Now the gymnasium opens at 5 am everyday and closes often after midnight. All the people here work very hard, and we are confident of hosting a simple, safe and splendid Winter Olympic Games," he added.