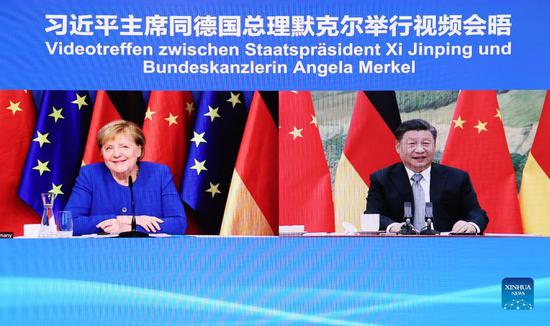 Chinese President Xi Jinping met with German Chancellor Angela Merkel via video link on Wednesday. They reviewed the development of China-German and China-EU relations in recent years in a friendly atmosphere and had an in-depth exchange of views over relevant issues.

"This saying is not only a good illustration of our in-depth exchanges over the years, but also reflects the important experience in maintaining the smooth and sound development of China-German relations over the past 16 years," Xi added.

As the Chinese people put a premium on friendship, said Xi, China will not forget old friends and will always keep the door open for Merkel, voicing the hope that Merkel will continue supporting the development of China-German and China-EU relations.

The Chinese president said they have had multiple in-depth exchanges of views on bilateral relations, major international and regional issues and state governance, among other topics, which have advanced bilateral ties and ensured collaboration between the two countries in responding to global challenges.

"This has demonstrated that countries can avoid the zero-sum game and achieve mutually beneficial results on a win-win basis, and this should be the main tone that the two sides should adhere to in bilateral ties," said Xi.

Noting that 2022 marks the 50th anniversary of the establishment of diplomatic relations, Xi said that keeping bilateral ties on the right course is of crucial importance.

"China always views its relationship with Germany from a strategic and long-term perspective, and is ready to maintain high-level exchanges with the German side, promote mutual understanding and friendship between the two peoples, tap the potential for cooperation in traditional fields, while exploring new areas of pragmatic cooperation in energy transition and the green and digital economy, among other areas, to further advance bilateral ties," said Xi.

Xi pointed out that pursuing peace and development is the common aspiration of China and the EU, saying that both sides advocate safeguarding multilateralism, support trade and investment liberalization and facilitation, and believe that the common interests of China and the EU far outweigh contradictions and differences.

Noting that this is a critical period for the global fight against COVID-19 pandemic and the global economic recovery, Xi said that China and the EU, as two important forces in the world, have a responsibility to strengthen cooperation and work together to deal with global problems in the face of increasing global challenges and rising instability and uncertainty.

He said the two sides should view China-EU relations from a broader perspective, understand each other objectively and comprehensively, and handle differences rationally, peacefully and constructively.

"It is hoped that the EU can insist on independence, truly safeguard its own interests and the unity of the international community, and work together with China and other countries to resolve the issues of peace and development," Xi said.

For her part, Merkel said she remembered all the exchanges she had with Xi over the past more than 10 years, and they had candid and in-depth discussions on issues of common concern, which have enhanced mutual understanding and promoted the sound development of Germany-China relations and EU-China cooperation.

During her tenure as German chancellor, China has achieved rapid development and has shown great potential, Merkel said, adding that she believes the EU should develop its relations with China independently.

"I believe that EU-China relations can overcome various complicated issues and continue to develop," she said.

Germany appreciates China's efforts to cope with climate change and protect biodiversity, stands ready to work with China to celebrate the 50th anniversary of the establishment of diplomatic relations between the two countries, and continues to strengthen bilateral and multilateral cooperation to jointly cope with global challenges, Merkel said.