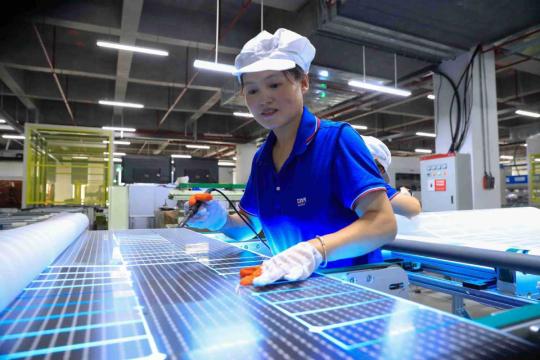 An employee works on a PV board production line in Hefei, Anhui province, in August. (ZHAO MING/FOR CHINA DAILY)

Given China's advanced recovery, an International Monetary Fund (IMF) official suggests that it may be time for the country to turn to its fundamental growth-drivers.

Okamoto participated remotely in the "Forum on National Affairs 2021" hosted by the Counsellors' Office of the State Council of China.

His recommendations also included rebalancing the economy to promote high-quality growth, strengthening social-protection programs and reforming the power sector to maximize the potential of the market-based carbon-pricing tool.

Okamoto also said that China is "a key contributor in supporting multilateral trade" and has much to give and gain by multilateral efforts.

He stated that China's economic recovery from the COVID-19 pandemic is in place and that its growth has already trended to pre-pandemic levels.

The IMF is projecting about 8 percent GDP growth for China in 2021.

"Because China is ahead of the curve in the recovery, it is not surprising that it is one of the first countries to normalize its macroeconomic policies," said Okamoto.

In the first half of the year, China's fiscal contraction was much faster and wider than expected, Okamoto noted. Temporary factors like natural disasters also slow growth.

"It is critical that we overcome the crisis by continuing to develop effective vaccines and making sure shots get into arms, in China and elsewhere," said Okamoto. "Many developing countries have benefited from China's support in vaccines and medical equipment."

He also suggested that China carefully calibrate its macroeconomic policies to the needs of the recovery.

"In the near term, as China has already front-loaded its consolidation efforts, a more neutral fiscal stance coupled with moderately supportive monetary policy will slow the drag on growth and secure the handoff to private demand," Okamoto said.

In the same speech, Okamoto presented the broader context of the world economy. Even as the pandemic resurges, the global economy continues to recover. Simultaneously, the fault lines exposed by COVID-19 appear to be more persistent.

Widespread vaccine access, mainly in advanced economies, has helped contain deaths and hospitalizations even where new cases have surged, allowing for a more significant normalization of economic activity. However, many emerging and developing economies with limited vaccine access continue to be held back as the pandemic persists.

The risks remain elevated due to new virus variants arising and setting back progress worldwide, and faster-than-expected policy normalization in major economies is triggering adverse spillovers, impeding the recovery of merging markets.

Okamoto noted that the crisis left deep scars in the form of increased poverty, debt and vulnerability, posing challenges to the fiscal sustainability, investment and growth of some economies.

China has as much to contribute to multilateral efforts as it does to gain, he said. Okamoto emphasized China's critical contributions to expanding vaccine access and its role in global debt-relief for low-income countries.

China was described as a "critical contributor" to multilateral trade support, including through World Trade Organization reform. He also praised China's leadership role in global climate efforts, including co-chairing the G20 Sustainable Finance Study Group and cooperating with the EU on green investment standards that contribute to a greener recovery.

"With the right combination of policies and the collective efforts of us all, we can steer global growth back on track, and the future will look brighter," Okamoto said in concluding.

On Wednesday, Gita Gopinath, the IMF's chief economist, called for coordinated action and greater accountability to ensure that the world meets a target of vaccinating 40 percent of people in every country against COVID-19 by the end of 2021.