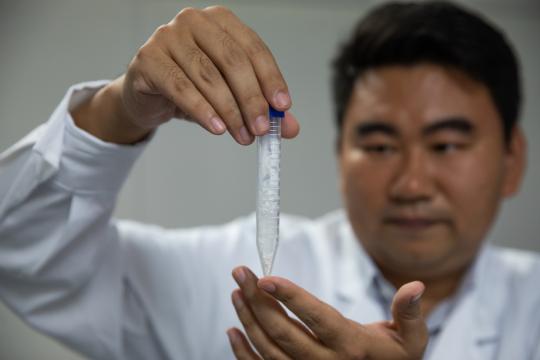 Cai Tao, one of the first authors of the study, shows the sample of the starch. (Photo/Xinhua)

Chinese scientists have created starch, a type of complex carbohydrate found in plants, using carbon dioxide, hydrogen and electricity, according to a study published in the journal Science on Friday.

Experts said if such technique can be scaled-up to the level of industrialization, it may revolutionize how this key nutrient and industrial ingredient is made, since it does not require farming and processing large quantity of starchy crops such as sweet potato and maize, thus saving more water, fertilizer, and arable land.

It may also be used to recycle carbon dioxide, a common industrial waste and a greenhouse gas, into a consumable product. This will help reduce carbon emission and combat climate change, especially if the electricity used is from renewable sources like solar and wind.

In space exploration, it may provide a sustainable food source for astronauts as they travel long distances in space and try to colonize other planets where growing food is unviable. Future space travelers may simply turn the carbon dioxide they breathe out into food they eat.

Ma Yanhe, the director of the Tianjin Institute of Industrial Biotechnology of the Chinese Academy of Sciences, said starch and other complex carbs make up of 60 to 80 percent of the human diet.

"Our breakthrough demonstrates that synthesizing complex compound like starch is achievable in a lab, and there are many industries that can benefit from this technology," he said.

Starches are widely used in sugar production, food and beverage processing, printing, drug-making, textile, animal forage and dozens of other industries, according to Bric International Group, a global agricultural data firm. This prompted the manufacturing of corn starch and its derivatives into an 80 billion yuan ($12.4 billion) industry in China.

Plants create carbohydrates like starch through photosynthesis, which is an extremely complex and inefficient process, said Ma, adding it would take a plant about 60 steps of metabolic reactions to turn carbon dioxide, water and sunlight into starch.

Cai Tao, one of the first authors of the study, said for six years, his team has been focusing on a single project: how to make starch like plants, but do it much faster.

Creating carbohydrate via more effective means is so important for sustainability on Earth and future space exploration that NASA listed converting carbon dioxide to glucose, a simple sugar, as one of its centennial challenges in 2018. Starch is made of a much more complex chain of glucose molecules.

Cai said their method involves first converting carbon dioxide and hydrogen gas into methanol, which is molecule that contain a single carbon atom.

Scientists then piece these single-carbon molecules like a puzzle into bigger and more complex molecules via enzymatic processes.

With the help of supercomputing, Chinese scientists have streamlined the natural starch making process from about 60 into 11 steps, with the final product being starch. Cai said the lab-made starch is chemically identical to starch in nature, whose solution can turn blue with iodine.