Su-perman soars to inspire next gen 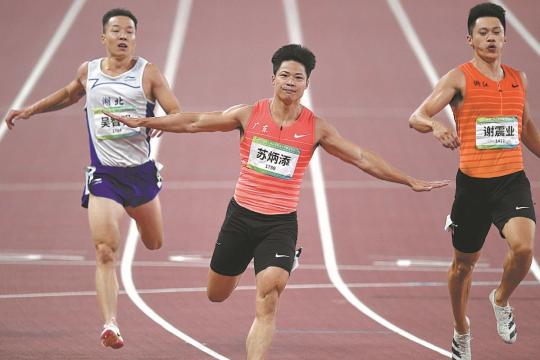 Su Bingtian hopes his age-defying late-career surge inspires the next generation of Chinese sprinters to push beyond the limits of people's expectations.

Fresh from his Tokyo 2020 heroics, the 32-year-old Su cemented his legacy by claiming his first National Games title in Xi'an on Tuesday.

"I hope through my own efforts, I can become an example to inspire more young sprinters," said Su, after winning the 100-meter gold medal in 9.95 seconds in front of over 17,000 spectators at Xi'an Olympic Sports Center.

"I want to tell the young sprinters that you are still in your 20s and you can still fight for at least two editions of the Olympics. Don't let stereotypes about sprinters' age or ability limit your growth.

"I think we can write our own life story. So I want to tell others my story. I want to set an example. You can still run fast at the age of 32."

Su dashed into the history books this summer in Tokyo by becoming the first Chinese to reach an Olympic 100m final, refreshing the Asian record to 9.83 sec in the process in his semifinal.

In 2015, he became the first-ever Asian-born sprinter to break the 10-second barrier in the 100m, but subsequently suffered a dip in form and even pondered retirement.

His perseverance, though, paid off in 2018 when he twice equaled the previous Asian record of 9.91, and clocked 9.92 to take that year's Asian Games 100m title in Jakarta.

A waist injury and the decimation of the 2020 season due to the COVID-19 pandemic had dampened hopes that Su could make more breakthroughs this late in his career.

However, he has emphatically proved all the doubters wrong this year with his superb results in Tokyo and Xi'an.

"Actually after the semifinal, I knew my condition was good enough to once again break the 10-second barrier," said Su on Tuesday.

"I have participated in four National Games. I've never seen so many spectators in the stands like here. And today is the Mid-Autumn Festival, so I wanted to produce my best performance as a gift to all the fans."

Su first participated in the National Games in 2009, finishing runner-up at the 2013 and 2017 editions. He admitted that this year would likely be his final appearance at the Games.

"The next National Games will be held in my home province Guangdong. Honestly, my chances of competing are slim. So I am grateful for being able to fulfill my dream this time," Su said.

He rated Tuesday's race as "the most competitive 100m sprint final ever in the history of the National Games", with defending champion Xie Zhenye taking silver in 10.10, and Wu Zhiqiang third in 10.18.

Injuries have stifled Xie's development since then, but Su rushed to his national teammate's defense in the post-race media conference, saying:"After I failed to win at the 2017 National Games, many people thought Su couldn't run again. I have proved I'm still able to compete at this level. I bounced back strongly.

"So in regard to Xie Zhenye, his limit is definitely not 10.10. He has been hampered by the injuries. This is not his best performance. I trust in Xie to have better results next year when he competes at the Asian Games in Hangzhou.

"We shouldn't just question an athlete when he's not at his best. Instead, we need to help and encourage him to regain his momentum. I will use my experiences to influence more people and let them appreciate Chinese athletes."