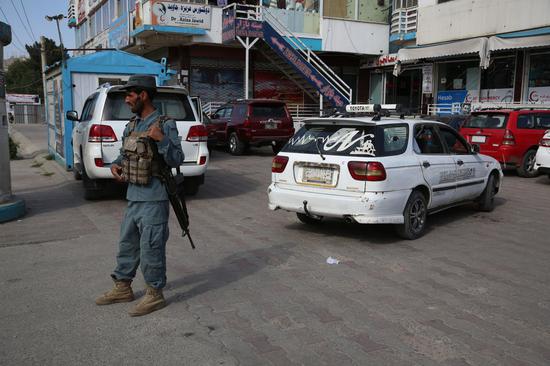 A policeman is seen at the site where Afghan senior official Dawa Khan Menapal was shot dead in Kabul, Afghanistan, on Aug. 6, 2021. (Photo by Sayed Mominzadah/Xinhua)

The U.S. Department of State said on Thursday that the Pentagon would deploy additional troops to Kabul airport in support of embassy staff drawdown as the security situation in Afghanistan continues to deteriorate.

"We are further reducing our civilian footprint in Kabul, in light of the evolving security situation. We expect to draw down to a core diplomatic presence in Afghanistan in the coming weeks," State Department spokesperson Ned Price told reporters in a daily briefing.

"In order to facilitate this reduction, the Department of Defense will temporarily deploy additional personnel to Hamid Karzai International Airport," he added.

He said that the embassy remains open and the United States plans to continue diplomatic work in the country.