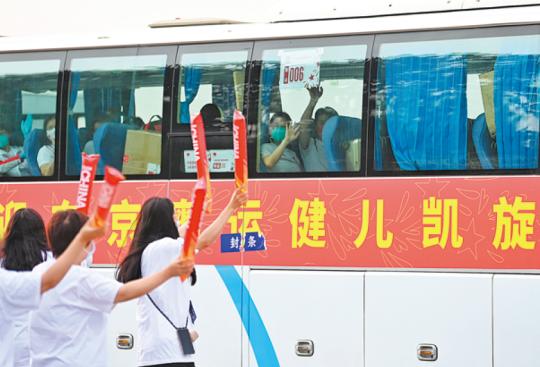 A crowd welcomes the Chinese delegation at Beijing Capital International Airport after their fine performance at the Tokyo 2020 Olympic Games. The athletes were later driven to hotels to go through strict COVID-19 quarantine measures. (TAO RAN/FOR CHINA DAILY)

Organizers of the Beijing 2022 Winter Olympics have taken valuable lessons from Tokyo's successful hosting of the Summer Games and its strategies to deal with COVID-19.

Thirty-four members of the Beijing Organising Committee were sent to Tokyo to take part in the International Olympic Committee's observer program. The majority of delegates have returned from the Summer Games, where they gained firsthand experience and knowledge by working with their Japanese counterparts in key posts.

They also studied the operational challenges of staging the world's biggest sporting event during a pandemic.

After reviewing notes, documents and video footage brought home from Tokyo, the Beijing 2022 organizers are more confident about delivering streamlined and safe Winter Games, which are scheduled to start on Feb 4.

"Even if we are preparing for winter sports, to witness and learn close up how the Japanese hosts tackled the challenge under the circumstances of a pandemic provided us with invaluable references," said Yan Cheng, human resources director of the Beijing Organising Committee.

China has developed effective COVID-19 containment and contact-tracing measures of its own. However, the visiting Beijing 2022 organizers drew lessons from Tokyo's approach, especially health protocols at competition venues and media facilities. These will serve as key additions to Beijing's own development of pandemic countermeasures during the Winter Games, the organizers said.

"We've paid attention to the details, such as the use of sanitizer sprays with a pedal that you can press with your foot, rather than using your hands, to minimize the chances of getting infected," said Wang Tongguo, a member of the Beijing 2022 Games service department.

Color-coded areas of hotels to separate athletes and Games staff who had finished their mandatory quarantine from those who hadn't, as well as the issuing of COVID-19 self-testing kits at the athletes' village were also useful measures, Wang added.

With only six months to go before the Winter Games open in Beijing and co-host Zhangjiakou, Hebei province, all 12 competition venues have been completed and tested. The remainder of the facilities are scheduled to be finished by October.

Beijing 2022 organizers are now busy finalizing details of the opening ceremony and training volunteers. They are also preparing for 10 final test events from September to December, which could see foreign athletes take part.

Other key issues that need to be finalized include whether, and to what scale, the Beijing Games will allow international spectators, the ticketing program and the length of the pre-Games quarantine period. The details are being negotiated between the Beijing Organising Committee, the International Olympic Committee and international winter sports federations.

"As the Tokyo Games drew to a close, we kind of got emotional bidding farewell to the athletes," said Yang Yang, a retired short-track speed skating Olympic champion and the current vice-president of the World Anti-Doping Agency. "Yet, knowing that the Beijing 2022 Winter Olympics are just around the corner has made us excited again."