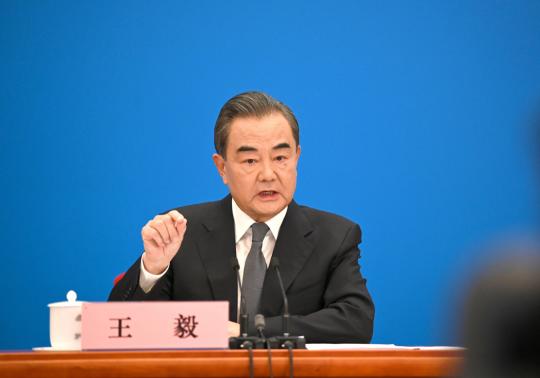 State Councilor and Foreign Minister Wang Yi attends a press conference on China's foreign policy and foreign relations on the sidelines of the third session of the 13th National People's Congress at the Great Hall of the People in Beijing, May 24, 2020. (Photo by Wang Zhuangfei/chinadaily.com.cn)

State Councilor and Foreign Minister Wang Yi has said that China will resolutely and repeatedly refute attacks against the country made on the basis of human rights claims, after the United States and Japan criticized China on issues related to the Xinjiang Uygur autonomous region and the Hong Kong Special Administrative Region.

Speaking via video link on Wednesday at the 11th East Asia Summit Foreign Ministers' Meeting, Wang said that such smears from the U.S. and Japan are cliches that ASEAN member countries have not repeated, and that China has the right to refute these allegations based on the principle of reciprocity.

"For such abominable behavior, we will resolutely make refutation each and every time it comes up," Wang added.

The Xinjiang regional government has repeatedly condemned allegations of "genocide" and "forced labor", and members of ethnic minority groups in Xinjiang, including the Uygur ethnic group, have shared their personal stories to challenge this misinformation.

However, Wang said, the U.S. has turned a blind eye and a deaf ear to this, and the paranoia it has shown is typical Western-style arrogance and impertinence.

Saying that the enactment of the National Security Law for Hong Kong and the reform of the electoral system have restored stability and improved the rule of law in the city, Wang asked if, by expressing their so-called concerns, external forces are trying to return the city to chaos and make "Hong Kong independence" forces take to the streets.

He urged certain countries to drop their illusions, saying: "It will be impossible for you to see that day!"

With regard to the South China Sea issue, Wang warned forces outside the region to respect the efforts of regional countries to safeguard peace and stop trying to interfere in the area.

China and ASEAN countries should be aware of these malicious intentions and firmly reject any actions undermining peace and stability in the South China Sea that destroy the unity and cooperation of regional countries, he said.

He called for all parties to respect the facts and laws, as well as the consensus reached by China and ASEAN to peacefully resolve disputes by countries directly concerned through consultation and negotiation.

All sides should refrain from unilateral action that aggravates tensions and widens differences, or from using force or the threat of force, he said.

As the countries taking part in the East Asia Summit Foreign Ministers' Meeting include major global vaccine producers, Wang called for expanding the supply of vaccines and accelerating the rate of vaccination, while strengthening cooperation in research and development for vaccine updates to fight the COVID-19 pandemic.

He also called on key Asia-Pacific economies and key forces engaged in tackling climate change to promote green development and create the conditions for a post-pandemic recovery.

China expects the 11th East Asia Summit to issue a leaders' statement on green recovery in order to enhance cooperation in the fields of environmental protection and new energy, Wang said.