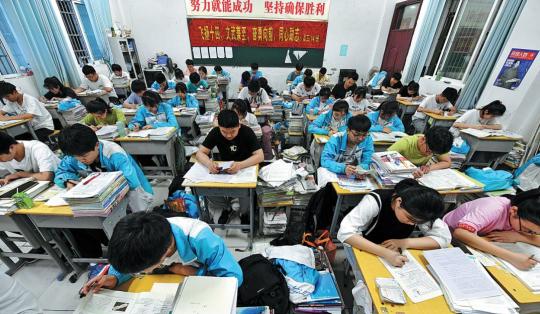 Scholars determined to overcome their hardships

He has even written this conviction down in a notebook to give himself inspiration. This message was also conveyed to millions after Zhou's story circulated widely online.

The 18-year-old, whose left leg has been amputated, scored 684 points out of a possible 750 in this year's national college entrance exam, or gaokao, and has been admitted to Tsinghua University in Beijing.

His mother, Xiao Yongzhi, said, "The whole family is so proud and happy for him, but I also feel sorry for what he has gone through in the past two years."

In September 2019, a truck ran onto a sidewalk, crushing Zhou's left leg and injuring his right. In great pain, he managed to remove a lace from his shoe and used it to bind the wound.

After hours of surgery, doctors were able to save his life. Over the next six months, Zhou underwent a number of surgeries, but doctors could not save the lower half of his left leg, which had to be amputated.

When Zhou was 3, his parents left home to support the family by becoming migrant workers in Yancheng, Jiangsu province. He and his younger sister lived with their grandparents.

After her son's accident, Xiao quit her job to care for him full time.

She said, "Although the accident was devastating for the family, Zhou did not waste time feeling sorry for himself."

The day after his first operation at a local hospital, Zhou resumed his studies. As the family members switched to hospitals in Shanghai, they always brought a large bag of schoolbooks with them so that Zhou could continue his studies.

In April last year, he returned to his class to prepare for the gaokao.

Zhou wears a prosthetic leg and uses a crutch or a wheelchair. The school allocated him and his mother a separate dormitory and offered to allow her to work there as a janitor.

However, being absent from class for more than seven months meant that Zhou could not keep up with his peers.

"Although I was frustrated, I still kept going," he said. "My classmates helped me move the wheelchair and carried things for me. I am very grateful to them."

Li Jiasheng, Zhou's head teacher, said he is highly impressed with the student's performance in the gaokao, but is not surprised by it.

"No matter what happens, he remains calm and tries to turn a bad situation into opportunities to make him stronger," Li said, adding that Zhou has been an inspiration to his classmates and teachers.