Chinese astronauts step out of spacecraft 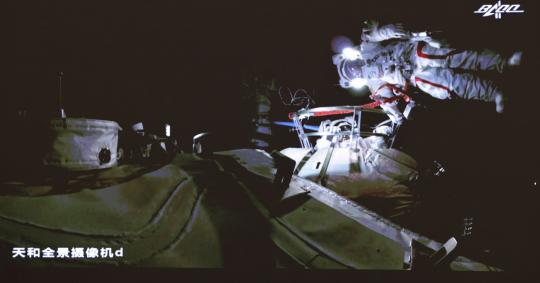 The Shenzhou XII mission crew engaged in China's first extravehicular activity in 13 years to perform about seven hours of work outside the core module of China's permanent space station.

After hours of preparations early Sunday morning, Major General Liu Boming floated out of the module, named Tianhe, or Harmony of Heavens, at 8:11 am to begin the challenging spacewalk as the module orbited Earth at an altitude of about 390 kilometers. Senior Colonel Tang Hongbo stayed in the air lock to assist Liu and then also emerged from the spacecraft at 11:02 am.

Wearing the nation's new-generation extravehicular suit, the pair conducted several sophisticated maneuvers such as testing a large robotic arm, installing equipment outside the spacecraft and adjusting the external panoramic camera.

During the spacewalk, Liu stood on, and moved with, the robotic arm for hours. Tang, in addition to assisting Liu and fulfilling his own assignments, also practiced the procedures for an emergency return into Tianhe.

At the end of the seven-hour operation, Liu turned his head toward an external camera, waved his hand and said: "We want to thank all people in our science and technology communities involved in the spacewalk. We are also grateful for the great support of the Chinese people. Next, we will conduct another spacewalk. We will fly higher while the space station will become bigger."