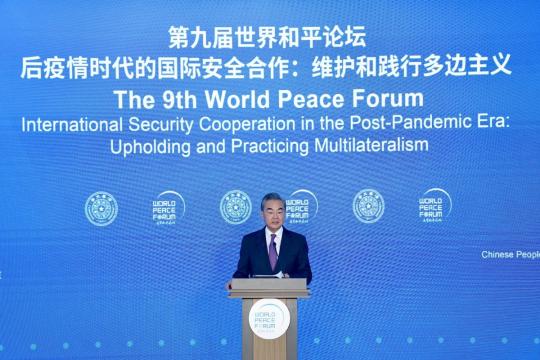 In a wide-ranging policy speech, State Councilor and Foreign Minister Wang Yi has urged Washington to act with sincerity and work toward solutions on a variety of hot-spot issues regarding countries such as Afghanistan and Iran.

Wang also underlined the urgent need to oppose bloc confrontation and power politics, as well as interference in countries' internal affairs, when addressing the ninth World Peace Forum in Beijing on Saturday.

The forum is a key annual policy gathering that brings together hundreds of leaders, officials and scholars on international relations from across the globe.

As this year marks the 30th anniversary of the end of the Cold War, Wang placed great emphasis in his speech on the necessity of working together to oppose "any dangerous practices of flaring confrontations or creating frictions", saying that "there is no winner in the Cold War, and the world has suffered deeply".

Since the U.S. military began withdrawing from Afghanistan earlier this year, the war-afflicted country has been stricken with increases in armed conflicts, bomb attacks, inadequate infrastructure and a humanitarian crisis.

The top priority in Afghanistan is to maintain peace and stability and to prevent wars and chaos, and the United States, as the initiator of the Afghanistan issue, should ensure a smooth transition in the situation there "in a responsible manner", Wang said.

Speaking on the Korean Peninsula nuclear issue, Wang said that since Pyongyang has taken measures to denuclearize and ease the situation, Washington should "show sincerity and make a response".

As for the United Nations' role in the issue, Wang said the Security Council should "invoke the reversible provisions" in a timely manner in resolutions related to the Democratic People's Republic of Korea to help it improve its economy and its people's livelihoods.

As the peninsula is located on China's doorstep, the country will "as always play a constructive role till the peninsula achieves long-term stability", he added.

On Iran's nuclear issue, Wang said the U.S. should correct its mistakes and take the initiative to lift illegal, unilateral sanctions imposed on Iran and third parties in an all-around, clean and thorough manner.

That could be done in exchange for Iran moving toward the same goal and promoting a breakthrough in the negotiations, Wang said.

Elaborating on the U.S.-led Indo-Pacific Strategy that targets China, Wang said it aims at creating bloc confrontation and forming a gang looking toward a geopolitical contest.

It is "a restoration of the Cold War mentality, a retrogression of history "and should be dumped in the trash, Wang said, adding that reliving the dream of Cold War hegemony will not help anyone prevail in the future, let alone rebuild a better world.

History and reality have repeatedly warned that a divided world cannot meet the common challenges facing the whole of mankind and a world of confrontations means disaster for humanity, he said.

Wang called on countries to refrain from acts inciting confrontation and creating rifts and instead should thoroughly remove obstacles to global and regional peace and security.

"To this end, we must make a clear-cut stand against bloc confrontation, power politics and interference in internal affairs," he said.

He expounded on China's stance on issues related to Hong Kong and Taiwan, saying "no one should underestimate the great resolve, the strong will, and the extraordinary ability of the Chinese people to defend their national sovereignty, territorial integrity and development interests".