TCM spreads its wings across the globe(2) 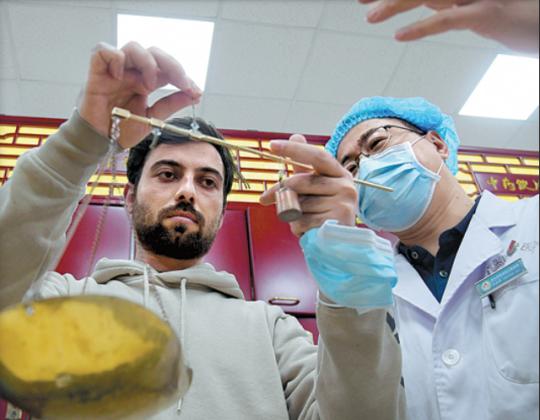 According to a XinhuaNet report, more than 13,000 foreign students come to China to learn the ancient form of medicine every year.

On June 7, a report from the National People's Congress Standing Committee showed that TCM had been introduced to 196 countries and regions, with over 30 TCM centers being established overseas.

Pan Ping, director of the academic department at the World Federation of Chinese Medicine Societies, or WFCMS, said TCM has become increasingly popular abroad in the five years since the first overseas TCM center was built. By the end of last year, more than 1 million foreigners had received treatment at such centers, he added.

Most of the centers are in countries and regions that are home to a large number of people of Chinese descent, including some European nations, Southeast Asia and the United States, Pan said.

"TCM did not take root in these countries in a day. It has spread overseas along with the footprints of Chinese immigrants over the past few centuries and has proved its value. In recent decades, internationalization of TCM has also accelerated," Pan added.

This progress was illustrated by the purple cupping circles on the back of US swimmer Michael Phelps during the 2016 Olympic Games in Rio de Janeiro, Brazil. Leading international figures have also reportedly had such treatment, sparking strong interest in TCM in the West.

The popularity of TCM can be traced back more than 40 years, when China launched reform and opening-up. It was also when Harish Chandra Shah, the first TCM practitioner in Nepal, visited Beijing to study Chinese medicine.

He spent six years at Beijing University of Chinese Medicine, where he studied TCM internal medicine for four years and acupuncture for two years.

Graduating in 1984, Shah returned to Nepal, where he has dedicated himself to TCM ever since. This was not easy at first, as the treatment was a new concept in his country, where its efficacy was questioned.

"I didn't care what other people said. I just did my job as a doctor and treated my patients. TCM would speak for itself after diseases were cured," said Shah, who has written many articles for newspapers and academic publications on the introduction of TCM in Nepal.