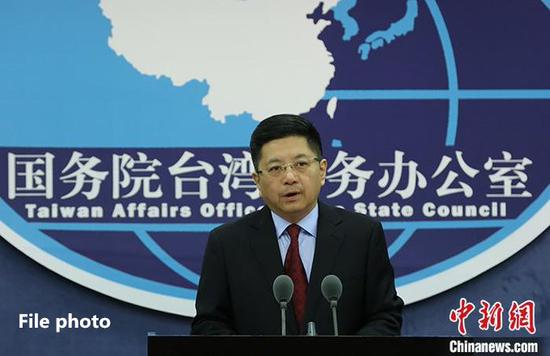 Ma Xiaoguang, a spokesperson for the Taiwan Affairs Office of the State Council, made the remarks in response to the DPP authority's groundless slander against the suspension of the Hong Kong Economic, Trade and Cultural Office (Taiwan).

The DPP authority has no remorse for meddling in Hong Kong affairs and providing support and shelter for rioters in Hong Kong, but points fingers at the rightful actions by the Hong Kong Special Administrative Region (HKSAR) government, said Ma.

There is no doubt that exchanges between China's HKSAR and China's Taiwan region should be conducted on the political foundation of the one-China principle, he added. "We firmly supports the HKSAR government in dealing with Taiwan-related affairs in accordance with the HKSAR Basic Law, and the policies of the Chinese central government."

In the context of the urgent task of controlling the COVID-19 pandemic, the DPP authority places its own political gains above public health on the island, and continued political manipulation, said Ma.

He warned the DPP authority that its attempts to sabotage the prosperity and stability in Hong Kong and interfere in Hong Kong affairs will result in severe punishment.