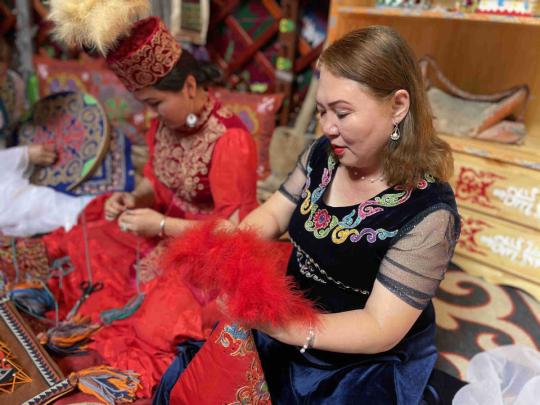 Jenisgul Nurtanaqin sorts out embroidery products she made at a workshop in Yining, Xinjiang Uygur autonomous region. (XING WEN/CHINA DAILY)

As you enter the Light of the Silk Road tourism town, a collection of night markets, souvenir stores, food stalls, hotels and exhibitions of ethnic cultures and customs, it is impossible to miss the 8-meter-high domelike tent covered in patterned felt carpets.

The large, Kazak-style yurt is used as a reception area for the tourism town, which is located in Yining city in the Xinjiang Uygur autonomous region.

Stepping inside the yurt, which covers more than 300 square meters, tourists can appreciate the shelter's prefabricated structure and exquisite interior decor, including furniture with delicate wood carvings, different kinds of Kazak embroidery, metal ware and leather ornaments, and enjoy a traditional Kazak song and dance performance, while sampling local delicacies.

Jenisgul Nurtanaqin designed the yurt and oversaw the group of embroiderers that created it, using weaving, spinning, braiding, felting, sewing and other handicraft techniques.

She hopes it will give tourists a glimpse of the traditional Kazak lifestyle and aesthetics.

Jenisgul has expertise in making yurts and Kazak ornaments, but as an expert maker of Kazak clothing, she is also a designated inheritor of a National Intangible Cultural heritage.

She learned needlework at a young age as she was born into a family in which both her mother and grandmother are embroiderers.

"I was able to embroider common patterns by the time I was in primary school. And after I began middle school, I would try to make clothes in my spare time," she recalled.

In the late 1980s, she studied Kazak literature at a university in Yining, Ili Kazak autonomous prefecture. While reading novels and folk tales, she became fascinated by the vivid, detailed descriptions of how Kazaks of different age groups and backgrounds dressed on different occasions.

She began to use the descriptions to sketch the garments.

In 1999, she set up her own Kazak clothing brand, Tasbulaq, and turned many of the sketches she'd painted on paper into real versions.

That same year, she designed over 30 suits of traditional clothing, which later helped her win a number of contests and ethnic clothing expositions.

"That encouraged me to keep studying Kazak clothing," she said.

Meanwhile, Jenisgul has been paying visits to older embroiderers living in villages across the Ili Kazak autonomous prefecture to collect traditional patterns.

"I embroider or draw the patterns according to their instructions," she said.

She has often consulted experts in Kazak culture, historians and archaeologists to determine the proper use of the different patterns.

"We are particular about the colors and patterns we use on different attire," she said, adding that she tries to follow the traditional rules of how to use the patterns when making clothes for people from different age groups and walks of life, or for use on different occasions.

Over the past two decades, Jenisgul has written five books on the meanings of the patterns and how to use them properly when making clothes. The books serve as reference material for new designers coming to her label.

Jenisgul promotes her brand at expos and by participating in textile industry contests. In June, 2012, the brand was designated one of the top 10 manufacturers of special items needed by ethnic groups in Xinjiang. Tasbulaq products have even been sold to customers from Kazakhstan, Kyrgyzstan, Germany, Turkey and other countries.

"I hope I can spread Kazak culture by making high-quality clothing," she said.

Tasbulaq helps lift the incomes of more than 300 Kazak women in remote villages across Ili as the company collaborates with 12 cooperatives, which gather and train women to make handicrafts and embroidery for sale. These cooperatives were set up as a part of national poverty alleviation efforts.

Regarding the future, Jenisgul plans to recruit more young talent to help her continue the tradition of Kazak clothing.

"I want to set up an industrial zone to produce items of Kazak intangible cultural heritage to boost local employment. I want to tap the potential of our traditional culture in the new age," she said.