Cooperation of all nations, not rivalries, needed now 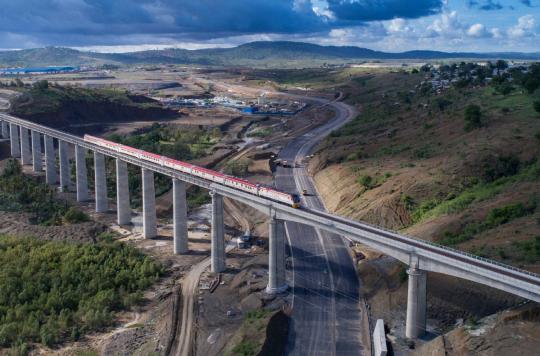 A passenger train is seen on a bridge of the Chinese-built railway linking the Kenyan capital Nairobi with Mombasa and Naivasha in 2017. CHEN CHENG/XINHUA

The world's huge infrastructure gap is widening with every passing year by about $350 billion, with the total gap projected to hit $5.3 trillion by 2030, according to the McKinsey Global Institute. The projected gap will triple to around $15.9 trillion if the needs of the United Nations' Sustainable Development Goals are included.

In 2020, the Global Infrastructure Hub, a G20 initiative, projected that the gap would be around $15 trillion by 2040 on the basis of data from 56 countries.

China has realized the worrisome situation and extended its hand in cooperation. It began efforts long before the sustainable development goal commitments and the aforementioned projections through its Going Global policy. In 2013, the China-proposed Belt and Road Initiative was launched, and China also pitched programs to help poor and less-developed countries.

Unfortunately, while the Chinese have invested in helpful projects, the United States and some other Western countries immediately started anti-China campaigns of one name or another.

Now the G7, the group of seven industrialized nations, proposed its own program, called Build Back Better World, or B3W. Investment is good in any form, especially if it helps to bridge the gaps and bring the world closer.

Unfortunately, it is not so in this case, since the G7 has termed the B3W a program to rival the BRI and Chinese investment. The G7's intentions are clear: undermining China through coercive diplomacy and action.

However, the B3W will find it hard to compete with the BRI for multiple reasons.

First, the Global Infrastructure Hub projected that 56 countries including those in the G7 will need $94 trillion for infrastructure through 2040. The American Society of Civil Engineers said this year that the US will face a gap of $2.6 trillion in the next 10 years in meeting the needs of infrastructure investment. Thus, the B3W's $40 trillion will not be able to meet the needs of leading countries, let alone other nations.

Inclusion of developing and least-developed countries will further complicate the situation. For example, the World Bank said in 2014 that South Asia would need $2.5 trillion through 2024 to meet development goals. Independent experts concluded that South Asia would not be able to invest the required financial resources.

Second, the B3W is exclusive in nature, as it has been designed to counter China. It is hard to understand how the world could sustain growth by excluding China, the world's second-largest economy and biggest trader and market of the future. It is estimated that around 600 million Chinese will join the middle-income group by 2049, presenting huge potential not only for China, but also the world.

Third, the B3W is not the first rival program. The US also launched the Better Utilization of Investments Leading to Development Act in 2018 with the hope that the private sector will chip in and lead the way.

Moreover, it is important to highlight that Western powers developed by exploiting less-developed countries in the past. They colonized Asian and African countries, plundered their resources, and treated indigenous people with inhumane cruelty. They also did not hesitate to resort to the genocide of indigenous groups.

The new era allows no room for colonization. Keeping this reality in mind, the West has invented new tools and means to maintain control of resources. China has challenged their hegemony with better alternatives, but the West is trying to renew the hegemony, which is one of the objectives of the B3W.

Now the pertinent question is: Will the B3W be successful? Yes, it can be successful if the G7 tries to build cooperation with China and say goodbye to coercive policies.

For that purpose, the G7 would first of all have to abandon the words and intention of "rivaling or countering" and look for ways to build connections with the BRI and other initiatives. Second, it would need to accept that China cannot be singled out. Third, it needs to realize that the West can no longer prolong hegemony.

So it's better to live with the new dynamics than to beat the drum of the past.

The world needs cooperation, not rivalries, in the face of multiple challenges. On top of everything, climate change has threatened the planet's very existence.

China is not only ready to cooperate, but calling for cooperation, with President Xi Jinping noting that the world is a community with a shared future for humankind. The world should study his idea.

The author, a political economist, is director of the Asian Study Center at the Sustainable Development Policy Institute based in Islamabad, Pakistan.