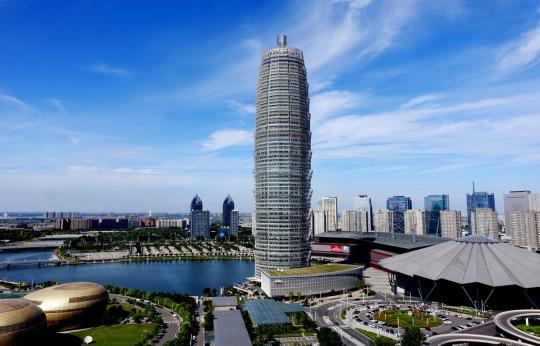 The Zhengdong New District in Zhengzhou, Henan province, with the Millennium Royal Plaza in the center. The 280-meter-tall building is inspired by the Songyue Pagoda, in the province's Songshan Mountain, which dates back some 1,500 years and is China's oldest brick pagoda. [Photo/China Daily]

Its total import and export value hit 308.65 billion yuan ($48.24 billion) during the period, up by 65.8 percent year-on-year, data from the Zhengzhou Customs showed. The figure jumped by 76.1 percent from the same period of 2019 before the COVID-19 pandemic.

The trade figure set a record high for the January-May period, according to Zhengzhou Customs.

Private businesses continued to be the biggest contributor to the trade growth in the province, while the United States, the European Union, and the Association of Southeast Asian Nations (ASEAN) are among its major trading partners.

In May alone, imports and exports totaled 55 billion yuan, a year-on-year increase of 41 percent.