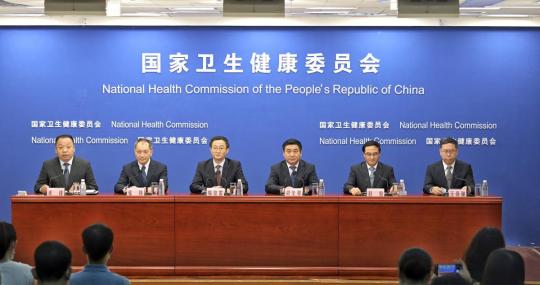 More than 8 million households in Shanghai have received free health knowledge handbooks and health promotion tools from the city government for the past 13 years, a senior health official from Shanghai said on Tuesday.

The distribution of these materials is one of the measures the municipality with a permanent population of more than 24 million has taken to continue facilitating health promotion among the public, Wu Jinglei, director of the Shanghai Municipal Health Commission said during a news conference held by the National Health Commission in Beijing.

"The latest health promotion tool that was distributed in January is a serving spoon for each family as the health authority has since the COVID-19 outbreak last year repeatedly emphasized the importance of using serving chopsticks and spoons when people dine together to prevent the spread of the virus," Wu said.

"Last year, 120 city-level political advisors made a joint proposal calling for residents to use serving chopsticks and spoons. A sample survey showed that 92 percent of the residents agreed with this proposal," he added.

The city's health authority has also reminded all medical staff to remain dedicated to health education and health promotion work so that the public is well-informed and not dependent on fragments of low-quality information from the internet, said Wu, who noted that these efforts have resulted in a constant rise in the health literacy level of Shanghai residents.

The latest survey in March showed that the health literacy level had grown for the 13th consecutive year to reach 35.57 percent in 2020, five times higher than the level in 2008, when the annual survey was first conducted in the city.

Official data also shows that the public's awareness of contagions and means of protecting themselves improved significantly last year.

"Massive and continuous public health information communication has helped many residents form habits like wearing a mask in public venues, washing their hands thoroughly, as well as maintaining social distancing and good personal hygiene in their daily lives," said Wu.