29 firms 'early birds' for next CIIE 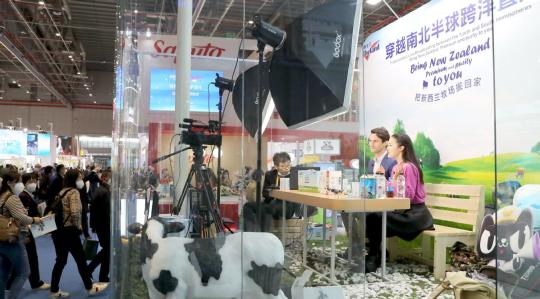 A New Zealand dairy brand promotes its products via livestreaming at the third CIIE in Shanghai. (Photo by Wang Zhuangfei/China Daily)

"During the past three years, the CIIE has grown from scratch to become a successful event, breaking many records in the global exhibition industry. This is something that would not have been possible without the efforts of companies from all over the world," said Wang Bingnan, vice-minister of commerce, while addressing more than 100 corporate executives of the CIIE enterprise alliance.

Initiated by exhibitors during the inaugural expo in 2018, the enterprise alliance now has 156 members from 23 countries and regions, and all of them are global Fortune 500 firms and leaders in their respective sectors.

Sun Chenghai, deputy director-general of the CIIE Bureau, said 60 members have signed memorandums of understanding on participation in the expo for the next three years.

Seven special committees of the alliance were formed last year, focusing on different areas such as dairy industry, industrial digitalization, and sports goods. The committees have organized seminars and forums that bring businesspeople, academic experts and government officials together during the ongoing expo.

"The alliances have helped promote specialization, marketization, branding and internationalization of the CIIE," said Sun.

Lin Jingzhen, executive vice-president of Bank of China, which is the strategic partner of the expo and helps recruit exhibitors through its branches around the world, said, "In the past two years, the alliance has become a platform for companies to exchange information and connect resources."

Fabrice Megarbane, president of L'Oreal China and the current rotating chairman of the alliance, said, "This is my second visit to the CIIE. I am impressed by the measures and efforts taken by China to ensure the safety of this year's CIIE, and make it more successful than last year."

This year's expo has an additional 30,000 square meters of exhibition area. Nearly 400 new products and technologies are set to be launched during this year's expo, while more than 70 percent of the exhibitors are repeat participants from last year.