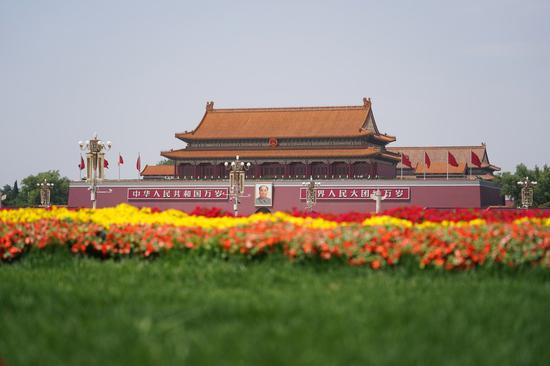 Photo taken on May 28, 2020 shows a view of the Tian'anmen Square in Beijing, capital of China. (Xinhua/Xing Guangli)

China has attained widely recognized economic success and promoted the well-rounded development of all its people during the 13th Five-Year Plan period (2016-2020), with decisive achievements on its path to building a moderately prosperous society in all respects.

For a massive country to score victories on so many fronts -- including eliminating extreme poverty within its borders -- amid unforeseen challenges such as the COVID-19 outbreak, policy consistency and a long-term approach must play vital roles.

The following are some essential factors that have propelled China's progress in innovative, coordinated, green and open development for all, and may tell how the country will strive to become more successful on its development path.

China has attached great importance to sci-tech innovation, taking innovation as the primary driving force of development. Since 2016, the country has made significant accomplishments in implementing its innovation-driven development strategy.

Investment in research and development (R&D) maintained rapid growth. China's R&D investment in 2019 totaled 2.21 trillion yuan (about 330 billion U.S. dollars), ranking second in the world, up 12.5 percent from a year ago and marking double-digit growth for a fourth consecutive year. Spending in 2016 was 1.57 trillion yuan.

Looking ahead, the country will uphold the central role of innovation in its modernization drive and take self-reliance in science and technology as a strategic underpinning for national development, according to the full text of the Communist Party of China (CPC) Central Committee's development proposals made public on Tuesday.