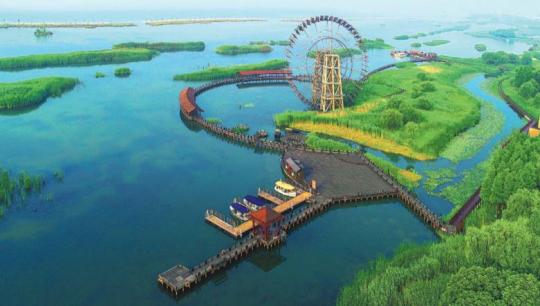 One year since the demonstration zone for the national integration strategy opened in the Yangtze River Delta, 32 innovative administrative policies and procedures have been formed and 60 projects are underway, officials said at a work review conference on Saturday.

Thanks to the efforts of all parties involved, the demonstration zone's construction has been a success, said He Lifeng, director of the National Development and Reform Commission.

The zone, which covers more than 2,400 square kilometers in the heart of the delta, includes Shanghai's Qingpu district, Wujiang district of Suzhou, Jiangsu province, and Jiashan county in Jiaxing, Zhejiang province.

"We will continue to make breakthroughs in collaboration and management among the different administrative bodies in this pilot zone to provide examples for larger integration in the delta and other regions across the country," He said.

At the border of Qingpu and Wujiang, a new bridge built over Yuandang Lake is to open this month.

The 180-meter bridge will cut commuters' travel time from 40 minutes to 5 minutes.

"We have thought about building the bridge since as far back as 2008, but the idea stayed on paper because the construction standards and approval processes of authorities on the two sides are different," said Yao Jun, a Wujiang district official who managed the construction of the nearby Fenhu High-Tech Development Zone.

A demonstration zone executive committee was established, providing a platform for officials from Shanghai, Zhejiang and Jiangsu to collaborate and explore smart ways to overcome administrative impasses.

After negotiations, higher construction standards and a joint approval process were adopted for the Yuandang Lake bridge, and it became the first infrastructure project connecting roads across provinces in the demonstration zone.

Before the bridge was completed, five cross-provincial bus lines were introduced in the border areas to ease travel between the three cities. Plans for the extension and connection of their metro lines are also being studied.

The prospect of easier transportation between city clusters in the delta, which is already a national economic engine, has lured more companies to the region. According to the committee, newly registered companies in the region increased by 12.6 percent in the first three quarters of the year.

In September, construction began on a research and development center for telecommunications giant Huawei in Shanghai's Qingpu district.

The 160-hectare center, which will focus on chip design and internet-of-things technologies, will bring about 30,000 employees to the area, according to its plan.

Over in the Wujiang's Fenhu High-Tech Development Zone, Innoscience Technology Co, a semiconductor manufacturer specialized in producing gallium nitride chips for more efficient power chargers and radar for self-driving cars, has built a 25-hectare factory, and it started testing its assembly lines in October.

The factory, with a designed annual output of 780,000 wafers, will be the world's first mass-production line of 8-inch gallium nitride chips, said Wang Peiren, deputy general manager of the factory.

"We chose to build the factory here because the region is strong in logistics and talents, and has developed supply chains for semiconductors," he said, adding that more than one-third of the company's senior researchers and managerial staff work in Wujiang but live in Shanghai.

A cross-city healthcare system has been built to make it easier for patients' health insurance to pay their bills if they go to hospitals in the other cities, and a unified environmental management standard will be enacted by 2022 to allow more joint monitoring and coherent law enforcement.