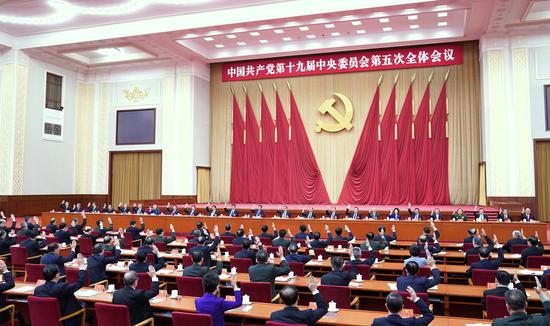 China's blueprint for its future development comes at a historic turning point in which the country is set to play a bigger role in the global economy, according to experts.

Their comments come after proposals for the country's 14th Five-Year Plan (2021-2025) for National Economic and Social Development and the Long-Range Objectives Through the Year 2035 were adopted by the Fifth Plenary Session of the 19th Central Committee of the Communist Party of China, which concluded on Thursday.

Martin Jacques, a British academic and author, said the proposals showed that China has a clear road map for the future.

He said the world will be observing the proposals more closely than ever because of how China has handled the pandemic more successfully than many Western countries.

"The world was already familiar with China's economic competence. Now they know that China's governance can cope with the greatest of challenges," he said. "2020 is the year of 'The Great Transition' when the world will come to recognize China as the new global leader."

Edward Tse, CEO and founder of Gao Feng Advisory, a management consultancy, also believes the proposals for China's medium－and long-term growth show the country has a clear direction while many developed countries are now just "scrambling".

"I regard this as a historical turning point and what China is proposing will mean that it will play a more dominant role economically and politically in the world. I think as a result more countries will be willing to work with China, particularly from the emerging world," he said.

The communique issued at the end of the Fifth Plenary Session said the country would achieve an economy of 100 trillion yuan ($14.9 trillion) this year and that the focus over the next five years will be on the quality rather than the quantity of economic growth.

There will also be an emphasis on the domestic market in the new plan, according to the document.

China will adopt a "dual-circulation" development pattern under which factors such as domestic consumption and indigenous technological development will play as important a role in driving China's development as any engagement with the international economy.

Setting out goals for the next five as well as 15 years is a break from tradition. Xi Jinping, general secretary of the CPC Central Committee, made 2035 an important staging post for the country in his report to the 19th CPC National Congress in October 2017.

By that time, China will aim to achieve major breakthroughs in key technologies such as advanced manufacturing, cyberspace and digital technology in order to become a global technological leader, according to the communique.

There will also be a focus on improving the environment to achieve a "Beautiful China" within this period.

The new five-year plan and the longer-range objectives through 2035 will be worked on and consulted upon over the next few months and be submitted to the National People's Congress, China's national legislature, for approval next year.

Wang Huiyao, president of the Center for China and Globalization, a Beijing-based think tank, said the five-year plan was an important one because it is likely to steer China through the middle-income trap.

"Many countries, particularly from Latin America, have failed to make that breakthrough but China is putting the right policies in place such as the focus on higher quality growth," Wang said.

Stephen Roach, a leading US economist and senior fellow at Yale University's Jackson Institute for Global Affairs, said the emphasis on domestic consumption was also important but that this should not be seen as just a defense against an uncertain international economic environment.

"With household consumption still less than 40 percent of China's GDP－the lowest such share of any major economy－a more aggressive push toward consumer-led rebalancing is long overdue," he said.

He welcomed the proposals to significantly increase social security provision, which he believed would reduce the reliance on "fear-driven "precautionary saving.

" (This is) taking dead aim on a key impediment to an increased share of personal consumption," he said.

George Magnus, a research associate at Oxford University's China Centre, said, however, that China was being driven to prioritize domestic production and consumption by a more difficult international environment and by attempts to decouple it from global supply chains in technology and other areas.

"China wants to become less dependent on the US and other Western suppliers," he said.

Zhu Ning, an expert on China's financial system and professor of finance at Shanghai Jiao Tong University's Shanghai Advanced Institute of Finance, insisted the emphasis on the quality rather than quantity of growth was now the right way forward. There was no indication of specific GDP targets in the proposals, which appeared to be a departure from the past.

"This is a welcome development. If there are targets for GDP they will probably be set within a range, rather than be specific," he said.

"Putting in place goals to be achieved over 15 years instead of five also gets people to think qualitatively rather than quantitatively."

For China to meet its developmental targets, further reform of the nation's governance system is seen as vital.

Ma Liang, a professor of public policy at Renmin University of China's National Academy of Development and Strategy in Beijing, said the Fifth Plenary Session was right to emphasize good governance and improving government capacity.

"Government reform and innovation is vital to achieve economic and social development. It will also boost public confidence in government capacity," he said.

Parag Khanna, a global strategist and author, said one of the issues if China does achieve its development goals is whether the world is actually big enough for a more highly developed China.

"The question is not one of China's capacity to supply itself and the world with essential and high-tech goods, but a demand question of which economies are in position to absorb those exports and put them to use in their economic recovery. This will be one of the central questions for the years ahead," he said.

At the Fifth Plenary Session, Xi said "victory was in sight" in terms of China achieving a moderately prosperous society in all respects in time for next year's 100th anniversary of the CPC.

Roach, also a former head of Asia and chief economist at investment bank Morgan Stanley, said China's record on poverty reduction "is unprecedented in the annals of modern global history".

He added it was possible to have confidence in the future direction it has now set by how it has dealt with both the global financial crisis in 2008 and the COVID-19 pandemic this year.

"China's relative successes in dealing with two major global crises in the past dozen years certainly stand in sharp contrast with the approach of other leading nations," he said.