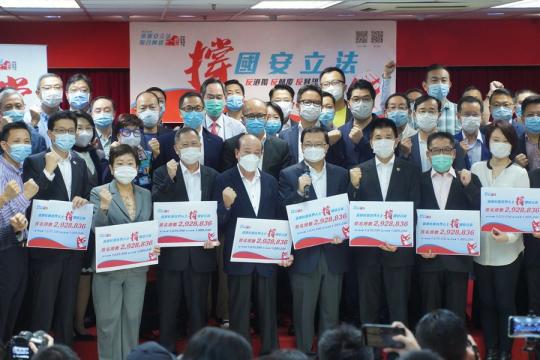 Political leaders, legal experts and the business sector in Hong Kong voiced support for the proposed national security law for the special administrative region as details of the draft were released on Saturday following a three-day session of the Standing Committee of the National People's Congress in Beijing.

They said the contents show the central government's commitment to protecting the "one country, two systems" principle and respecting the city's high degree of autonomy.

The national security law draft proscribes secession, subversion of State power, terrorist activities and collusion with foreign and external forces. It stipulates that the Hong Kong Special Administrative Region will establish a national security commission to carry out its constitutional responsibility and the central government will station a National Security Agency in the SAR to coordinate the work.

The draft requires full respect and protection for human rights in carrying out the law and the presumption of innocence until proven guilty by judicial organs, which is in line with Hong Kong's common law system.

In social media post, Leung, who is also a vice-chairman of the Chinese People's Political Consultative Conference National Committee, China's top political advisory body, said the law will again demonstrate the enduring spirit of "one country, two systems", "Hong Kong people governing Hong Kong" and the high degree of autonomy once it is enacted.

Executive Councilor and barrister Ronny Tong Ka-wah said the draft provides answers to the two most concerning questions in Hong Kong－how to achieve the balance of safeguarding national security while protecting Hong Kong people's perception of freedom, and how to best suit the city's current social and legal system.

In a statement released on Sunday, the Chinese General Chamber of Commerce said it welcomed the draft as national security plays a key role in the city's development.

Rita Fan Hsu Lai-tai, former president of the Legislative Council of Hong Kong, said the central government's National Security Agency will effectively help the SAR government to train a professional team for law enforcement against the four categories of crimes the draft stipulates.

Hong Kong Secretary for Justice Teresa Cheng Yeuk-wah, Secretary for Security John Lee Ka-chiu, and the chiefs of the city's six security forces, voiced unreserved support for the law. Lee said on Sunday that preparatory work has been underway for a new security commission and a special police team required by the draft.

Chief Executive Carrie Lam Cheng Yuet-ngor said in a social media post she believes that when the law is enacted, Hong Kong residents' expectations for the city to get back on track will be realized, and it will no longer witness external forces' attempts to jeopardize national security.