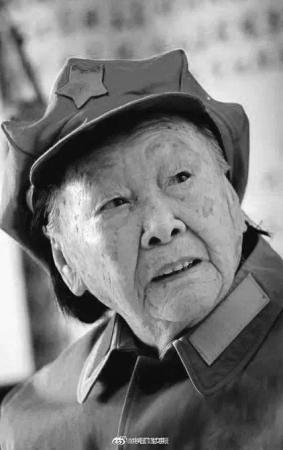 A portrait of Wang Dingguo. (Photo/CNR)

Wang Dingguo, a Red Army veteran who had completed the Long March, died of illness at the age of 107 on Tuesday, leaving the world with one less survivor of the epic military expedition who knew so well about the struggle, and more importantly, the power of determination and faith.

The Long March, which was carried out by the Red Army and led by the Communist Party of China to combat the Kuomintang regime, covered over 12,500 kilometers from October 1934 to October 1936.

"There are only less than 100 Red Army soldiers who took part in the Long March that are still alive. With Wang's passing, there is now one less person among them," said Xue Gang, a history consultant of the Chinese Martyrs Glorification Promotion Association. "And the only time people hear about them is when their obituaries are published. Actually, their stories are all truly inspirational and must be preserved when we still can."

Wang from Sichuan province was believed to be the oldest female Red Army veteran before she died in Beijing. She joined the Red Army and the Party when she was 20, five years after she was sold to a local man to be his wife.