Scaling the heights for three generations 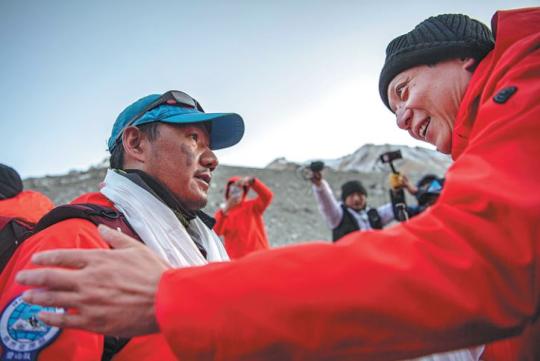 A khata, or ceremonial scarf, is presented to the head of the survey team as he arrives at North Base Camp in Tibet autonomous region on May 28, 2020. (Photo/Xinhua)

He could feel the cold in his throat as he breathed in the thin air and got up drowsily to prepare breakfast for his team.

The native of Xi'an, Shaanxi province, is the third generation of his family to work for the Ministry of Natural Resources' 1st Geodetic Surveying Brigade, where he has been employed as a technician and driver for more than a decade.

During the recent campaign to recalculate the height of Qomolangma, known in the West as Mount Everest, Liu served more as a cook than a driver. The project was carried out by the 1st Geodetic Surveying Brigade and the China Mountaineering Team.

Every morning, Liu rose early to prepare breakfast for more than 30 people-the work included washing and cutting vegetables, then cooking them. When he had to prepare meals for more than 50 people, he was helped by two locals.

"Everyone has different tastes. I try different things to make people happy and help boost their appetites so they will have more energy," Liu said.

As vegetables often spoil at extremely low temperatures, Liu used rocks to build a natural "cupboard" that would keep the ingredients fresh.

His grandfather and father both worked for the 1st Geodetic Surveying Brigade, so Liu grew up with its traditions and was also strongly influenced by his forebears.

Like his grandfather and father, he has discovered that working for the brigade is not easy.

For example, when his grandmother died, his father was on a surveying trip in the Tibet autonomous region and only learned about her death 15 days after she had been cremated.

"I was young when it happened, but the memory is still fresh," said Liu, who was born in the 1980s.

"As the work requires many trips year-round, I was not there when my oldest son was born-I was on a trip to Sichuan province. This is the reality for us," he said.

"Having time for work, but not family is a common fate for those of us who work for the brigade. It is part of our lives, and we have learned to accept it."

Liu did not have much time to think about many things, but he feels his life has been enriched by his endeavors and achievements.

"When I first came to the 1st Geodetic Surveying Brigade, I quickly realized that my life would be full of interest, hope and happiness," he said.