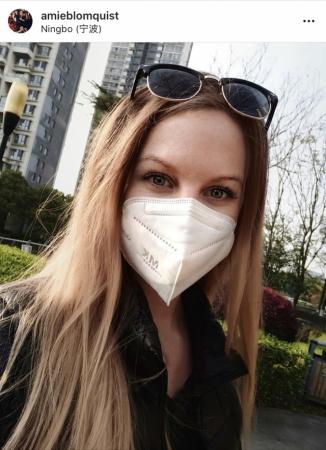 Amie Blomquist, a 27-year-old Swede living in Ningbo, Zhejiang Province, has gone viral with a long Facebook post she shared on Wednesday, listing and comparing the way various countries — China, other Asian countries and the West — handled the novel coronavirus over the past four months.

The post quickly gained momentum online and has struck a chord with netizens worldwide.

Blomquist said she read the material somewhere else and decided to post it on her own social media account to let her families and friends know the facts. The post began with an eye-catching title "How China LIED to the world" and was organized in chronological order, starting four months ago and ending in March.

In the post, she noted that four months ago, when COVID-19 began to spread, China announced national lockdown and quarantine policies, while some Western leaders compared it to the flu and claimed that wearing a masks was unnecessary.

At the same time, Asian countries began to adopt measures such as masks and border controls, the post said. 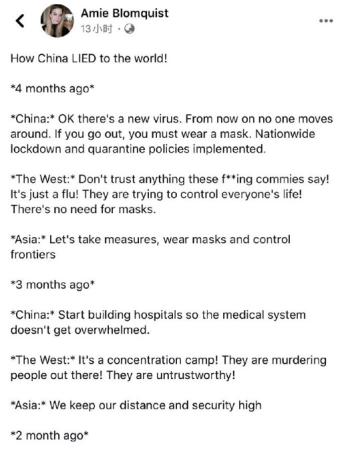 When China started building makeshift hospitals to relieve the burden on its medical system three months ago, voices in the West referred to China as untrustworthy, the post stated, while countries in Asia began to impose a high degree of social distancing and security.

The post continued with such comparisons two months ago, stating that when China was experiencing a surge in the number in patients, as well as a shortage of medical supplies and practitioners, the West laughed at China's plight, saying the country without enough personal protective equipment for doctors and nurses was "backward".

The number of infections was getting smaller in China a month ago and people started to get back to work. However the countries in the West claimed that "Millions of Chinese people must have died! It's still spreading!" when seeing the rising amount of coronavirus infections in some hard-hit countries, Blomquist's Facebook page claimed.

A month ago, the novel coronavirus began to spread around the globe. The writer said China must be wondering why things are getting out of control in the West and whether Western countries were just sitting there pointing fingers at China for three months and did nothing.

The post pointed out that even now, some in the West are blaming China, saying it gave false data and didn't tell the world how dangerous the virus is.

The post on Blomquist's Facebook page has received nearly 70,000 reposts and likes, as well as hundreds of comments from global netizens.

Netizen Denise Bradford hailed the post as "a very accurate summary of the whole debacle" in her comment. She wrote: "The West was warned. I tried to tell people to wear masks and I was laughed at."

Blomquist has been living in Ningbo since 2012 and currently studies supply chain management logistics at Zhejiang Wanli University.

When the virus started to spread in China, she followed suggestions from her Chinese friends to stay in Ningbo. When asked by a Swedish media outlet about the decision and the calm she appeared to have amid the epidemic in China, Blomquist said she's been in the country for many years and trusts China. Like many other residents in Ningbo, Blomquist stayed at home until the lockdown was lifted.

She said she shared the post on Facebook mainly to let her families and friends know the truth, and she hoped her beloved motherland Sweden would also tighten measures for the prevention and control of the coronavirus.

"China has done what it supposed to do for the pandemic and also warned the rest of the world," Blomquist was reported as saying. "I really hope countries in the world will stop blaming each other and unite as one."