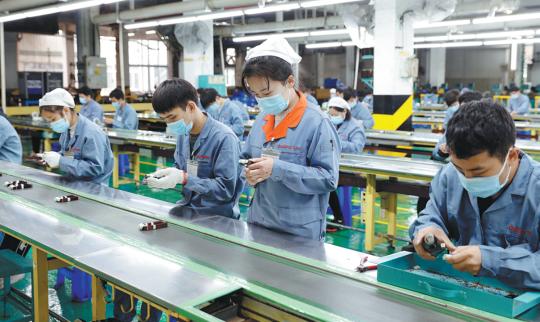 Chinese companies have been gearing up to fulfill their overseas orders via the internet as the country's largest trade event is scheduled to be conducted online due to the spread of the COVID-19 pandemic.

"Plans have already been made to increase overseas customers' knowledge of our products through online measures," said Pan Zisheng, vice-director of Galanz Group's Asia-Pacific business department.

A leading white-goods brand based in Foshan, Guangdong province, Galanz will design a web page-with 3D features-to display its latest products and services for overseas buyers during the online fair, Pan said.

Due to the spread of the coronavirus pandemic around the world, China will host the 127th China Import and Export Fair, or Canton Fair, online from mid to late June, according to a recent executive meeting of the State Council.

The fair, widely known as a barometer of China's foreign trade and held twice a year in Guangzhou, capital of Guangdong, was previously scheduled between Wednesday and May 5.

China's imports and exports were down 9.6 percent year-on-year to 4.12 trillion yuan ($590 billion) in the first two months of this year, mainly due to the impact of the global pandemic, according to the General Administration of Customs.

"Imports and exports in March were doing better than the previous two months," said GAC spokesman Gao Feng during a regular news conference on Thursday.

Orders of some export-oriented companies have been canceled or delayed, with new orders being largely affected, Gao said.

"In the short term, overseas orders among textile and clothing companies have been particularly affected," Gao added.

However, some Chinese companies, particularly those with business related to protection and control of the pandemic, have seen an increase of overseas orders recently.

After finishing more than 400 seam-sealing machines for the Chinese market in the last two months, Guangzhou Gao Ke Garment-making Equipment Co Ltd had begun a new round of production of such machines, most designed for overseas buyers.

As the COVID-19 pandemic now affects most countries and regions around the world, demand for supplies of medical materials has increased dramatically, Wu said.

Wu's company has received Indian orders for 350 seam-sealing machines, which are vital in producing protective suits as they help prevent viruses from infecting people by attaching seal strips to medical-use gowns.

"We are exporting our machines to help produce more medical protective suits in India," Wu said.

"Chinese companies will have better access to the global market by showcasing their products online, given that the COVID-19 pandemic has already cast a shadow over global trade," Wu added.

With the help of advanced information technology, companies from all over the world will be able to display their products and conduct negotiations online, as well as place orders and do business from home, according to Li Xingqian, director of the Ministry Commerce's foreign trade department.

"Organizing the event online is not only a practical measure to deal with the pandemic, but also an innovative development to the traditional fair, as the internet already plays a big role in people's lives and business activities," said Li, during a State Council news conference on Friday.

Li said that 25,000 companies from home and abroad will promote their products online and live video marketing and cross-border e-commerce services will be available to all companies and overseas buyers.

"It is not simply a matter of copying the traditional fair on the internet, but a whole new online exhibition structure and re-engineered process," Li added.

Guangdong will upgrade its cross-border e-commerce services for export-oriented companies to help weather fallout at a time when the COVID-19 pandemic is affecting most countries and regions, Zheng said.