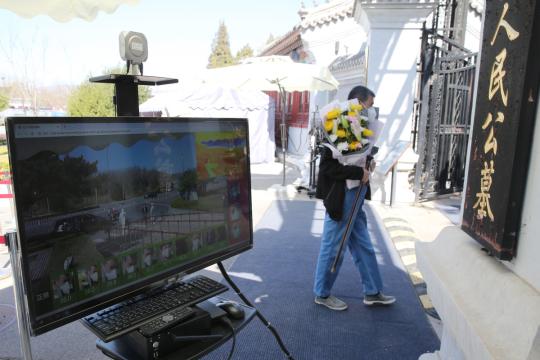 Millions of people are finding new ways to honor their ancestors.

In recent weeks, the novel coronavirus outbreak has abated domestically, prompting authorities to lift bans on businesses and travel in regions less affected by the epidemic.

As part of the trend, cemeteries outside of Hubei province－which was ravaged by the virus－have reopened, just in time for the traditional Tomb Sweeping Day, which falls on April 4 this year.

Normally, tens of millions flock to burial grounds in the period around the holiday to clear debris and leave food, flowers and imitation bank notes as offerings for dead relatives.

The age-old tradition received a major boost in 2007, when the festival, known in Chinese as Qingming, was officially recognized as a national public holiday along with Dragon Boat Festival, which will fall in June, and Mid-Autumn Festival, which is usually held in September or October.

Before the change, people observed the festivals after work if they fell on workdays. The new status was aimed at bolstering people's pride in traditional Chinese culture.

Through a rearrangement of workdays, tomb-sweeping relatives are entitled to a three-day break, which removes barriers to the celebration of filial piety.

According to the Ministry of Civil Affairs, about 9.78 million people visited cemeteries during the three-day period last year, a rise from the 9.72 million in 2018.

The holiday has also become increasingly popular as a prime time for spring tourism.

According to the China Tourism Academy, 112 million domestic tourist trips were recorded during the three days last year, a year-on-year rise of 10.9 percent, and tourism revenue during the period reached about 48 billion yuan ($6.7 billion), a rise of 13.7 percent from 2018. 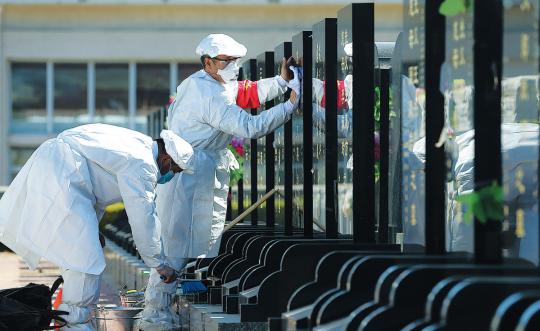 Even though new infections in Hubei have fallen to single digits or even zero over the past few weeks, local authorities have maintained an uncompromising ban on tomb-sweeping activities in a bid to prevent large gatherings that could facilitate the spread of the virus.

In a March 24 circular, the provincial government ruled out the possibility of commercial cemeteries across the province receiving visitors during the festival, although exceptions were made for some burial grounds in rural areas.

Commercial facilities in the provincial capital, Wuhan, which was hardest hit by the epidemic, will not reopen until at least the end of the month, and cemeteries elsewhere in Hubei will remain closed until April 20 at least, it said.

Cemetery authorities will hold remembrance ceremonies to mitigate the absence of relatives at graveyards, it added.

In less-affected areas, cemetery operators have introduced rules to limit the number of daily visits and screen mourners for fevers, coughs and other symptoms of the virus.

Shanghai authorities have discouraged nonessential visits to cemeteries during the festival to prevent gatherings and possible infection. Instead, they have encouraged mourners to remember departed family members on a designated website, where they can jot down heartfelt words and present a digital bouquet. Official online group ceremonies are also being encouraged.

In Ningbo, Zhejiang province, which is near Shanghai, authorities have banned most cemetery visits. The only exceptions are people who have been bereaved since 2019, as a comfort measure. To prevent traffic jams, all visitors must make reservations. 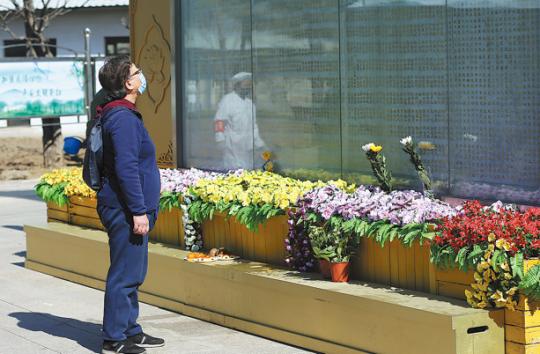 A visitor reads names on a memorial wall at the cemetery. [WANG ZHUANGFEI/CHINA DAILY]

The Beijing government is also promoting online mourning over visits to tombs, and has introduced a reservation system to limit the number of daily visits to graveyards.

For example, the Babaoshan People's Cemetery in the city's western suburbs, which reopened on March 21, has suspended the interment of ashes indefinitely and limited daily visitor numbers to just 3,000.

In the past, the cemetery played host to as many as 40,000 visitors a day in the weeks straddling Tomb Sweeping Festival, according to the management.

The main entrance has been cordoned off to form four narrow, one-way passages that allow only slow progress.

In addition, thermal imaging equipment has been installed at the end of the incoming passageway to monitor body temperatures.

Cemetery workers are required to wear protective gowns, goggles, face masks and single-use caps. A broadcast system reminds visitors not to overstay their alloted time slots, and in-house flower shops have been closed to prevent crowds and long stays. To fill the void, a small counter has been set up to hand out chrysanthemums free of charge.

The cemetery has also unveiled a cleanup service to reduce visitor numbers. Cemetery workers scrub headstones and lay three chrysanthemums at the request of family members, free of charge. When the cleaning is completed, a photo is kept in case family members want to check on the work.

The cemetery used to offer equipment, such as buckets, rags and shovels, for tomb-sweeping relatives, but the service has been stopped to reduce person-to-person contact. 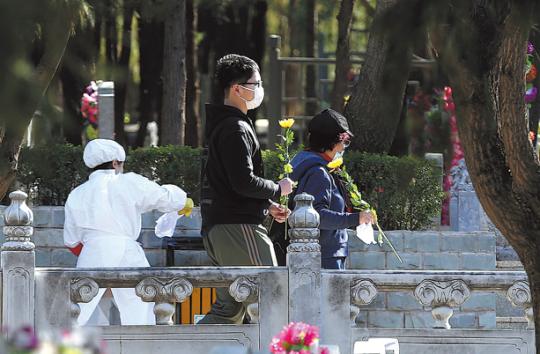 Mourners carry chrysanthemums as they walk through the Babaoshan cemetery. [WANG ZHUANGFEI/CHINA DAILY]

Meng Xiankai, the cemetery's deputy director and spokesman, said the measures seem to have worked so far, with the number of visitors hovering at around one-third the daily limit.

According to Meng's office, 711 visits were booked for March 22, but only 597 people showed up. As of March 24, about 2,000 visits had been booked on April 4, Tomb Sweeping Day, which is usually the peak time for visitors.

Meng added that the authorities felt obliged to impose the strictest measures because many of the tomb sweepers are seniors, and therefore especially vulnerable to the effects of the coronavirus.

"We've no official tally of senior visitors, but very few young people visit the cemetery, and then usually only to accompany their aging parents," he said.

Guo Hao, who was helping his elderly parents tidy his late grandfather's burial plot on March 23, said they had expected more people at the ceremony, but they were the only visitors in the area.

"There are far fewer people," he said. "I can tell from the street outside, which is nearly empty. It used to be packed with cars carrying tomb sweepers during similar periods before."

In response, demand has risen for cleanup services. Liu Kun, who oversees the service, said about 400 orders were placed in the first three days after reopening.

"We have 10 people on board, and they are split into three smaller groups," he said, adding that a group can only clean about six headstones an hour because some of the early tombs are hard to locate. "We are short of hands."

The labor shortage is the result of the outbreak. It disrupted Lunar New Year celebrations and triggered widespread travel restrictions, which have prevented many cemetery workers from returning to Beijing from their hometowns.

Even if the travel restrictions were lifted in most places outside of Hubei, strict quarantine rules have been put in place so new arrivals are subject to 14 days' home isolation, which makes an immediate return to work impossible. 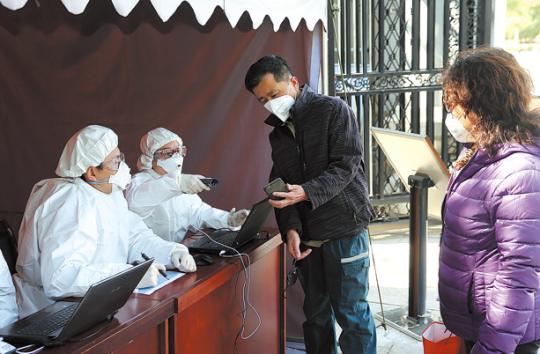 A reservation code is presented and scanned by cemetery workers before people are allowed to enter during the outbreak. [WANG ZHUANGFEI/CHINA DAILY]

In addition to restrictions on tomb sweeping, the outbreak has reshaped other aspects of death, even in rural areas, where traditions run deep.

Zhang Aiqin, whose husband died of a cerebral hemorrhage in February at age 72, said the outbreak forced her family to shorten the funeral period from a week to just three days－from hospital to grave.

"The village committee has banned people from holding banquets, hiring musical troupes and inviting guests, which is a must in normal times," said the 68-year-old farmer from Xingping, Shaanxi province.

A typical funeral in Zhang's village costs about 30,000 yuan, but she only spent about one-third of that sum, mainly on digging the grave and buying the coffin.

On Jan 31, the Ministry of Civil Affairs released a circular urging all local authorities to persuade people to streamline formalities related to funerals, which usually include a large banquet for relatives and neighbors. On the third anniversary of the funeral, some families hold another banquet, along with a performance by a traditional opera troupe for the guests. 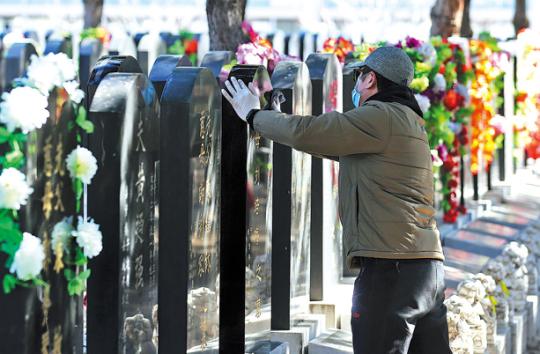 Authorities have long lambasted the "backward custom" of regarding funeral formalities as a symbol of social status, as well as extravagant displays prompted by the belief that an expensive ceremony will ensure a good afterlife.

In recent years, media have reported how some rural families have been bankrupted after borrowing money to host wakes for departed relatives.

The ministry's circular also tightened controls on the bodies of those who died from the coronavirus. Now, no one is allowed to open sealed body bags without health department approval.

The circular urged local authorities to cremate bodies at the crematorium nearest to the hospital in which the infected people died, making it impossible for some families to say their last goodbyes.

Yang Anrong, founder of a funeral etiquette company in Kunming, Yunnan province and a veteran cemetery manager, said the emergency measures are crucial to contain the spread of the little-understood virus. However, the stripped-down funerals and the lack of opportunity to say last goodbyes were likely to cause psychological damage to the living.

"Now, the physical hardship experienced by patients is the main focus, but the psychological trauma for families is largely kept out of sight," she said.