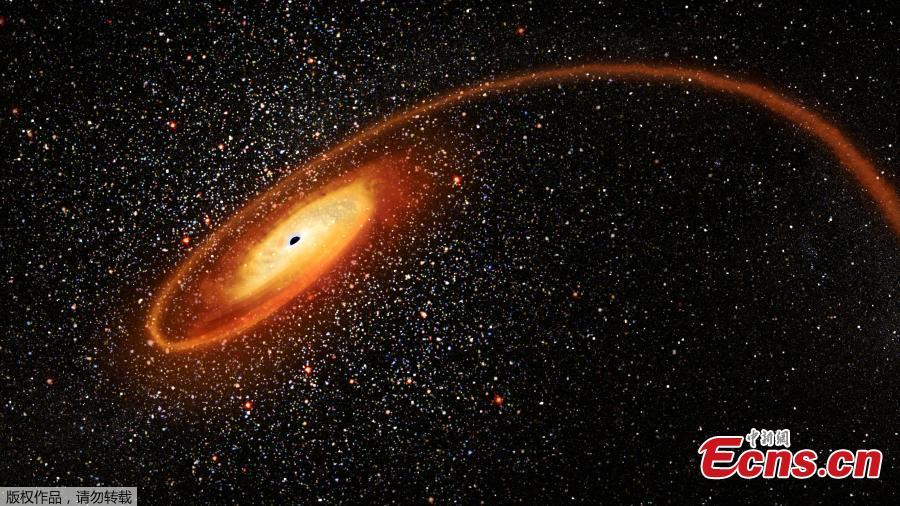 A cosmic homicide in action, with a wayward star being shredded by the intense gravitational pull of a black hole that contains tens of thousands of solar masses in an artist's impression obtained on April 2, 2020. (Photo/Agencies)

Astronomers have found the best evidence for the perpetrator of a cosmic homicide: a black hole of an elusive class known as "intermediate-mass," which betrayed its existence by tearing apart a wayward star that passed too close. Weighing in at about 50,000 times the mass of our Sun, the black hole is smaller than the supermassive black holes (at millions or billions of solar masses) that lie at the cores of large galaxies, but larger than stellar-mass black holes formed by the collapse of a massive star. These so-called intermediate-mass black holes (IMBHs) are a long-sought "missing link" in black hole evolution. Though there have been a few other IMBH candidates, researchers consider these new observations the strongest evidence yet for mid-sized black holes in the universe.

A star being torn apart by an intermediate-mass black hole, surrounded by an accretion disc is seen in an artist's impression. This thin, rotating disc of material consists of the leftovers of a star which was ripped apart by the tidal forces of the black hole. (Photo/Agencies)