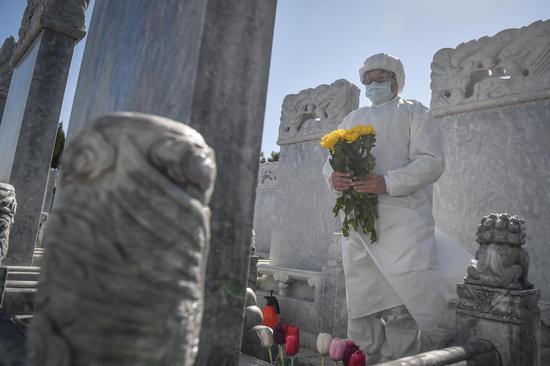 A cemetery staff member offers flowers to the deceased at the Babaoshan People's Cemetery in Beijing, capital of China, March 28, 2020. (Xinhua/Peng Ziyang)

Wiping the tombstone, reading out a letter of prayers and offering a bouquet and a cup of tea, a man is performing a ritual typical to a Chinese traditional festival - Tomb-sweeping Day in front of a tombstone in Fushouyuan cemetery park in Shanghai.

"Madam, I am here to pay respects to you on behalf of your children," the man chants while livestreaming the service to the family of the departed.

As this year's Tomb-sweeping Day, also known as Qingming Festival, coincides with a critical stage of China's fight against the novel coronavirus disease (COVID-19), more Chinese families choose to remember the departed in this way to avoid mass gatherings.

From March 12 to 19, Fushouyuan cemetery park carried out such memorial rituals on behalf of 1,542 families, a substantial increase from past years, said Zhao Yu, who spoke for the cemetery operator.

"While honoring the memory of my late husband, I also contributed to protecting the public," said Pu Zhizhen, a university professor in Shanghai. "I believe he would agree with me remembering him in this way."

In fact, tomb sweeping by proxy enabled by the prevalence of social media and short-video sharing platforms is not something new but has gained popularity among Chinese people in recent years.

"We have been offering the service for several years, helping those who couldn't go to the tombstone to pay respect to their ancestors in person," said Zhang Jingxue, a manager at a cemetery enterprise in Zhuozhou city, north China's Hebei Province.

"A rising number of people choose it this year due to COVID-19," Zhang added.

In an era when more Chinese people opt to migrate to big cities for better career prospects, many find it difficult to make it to their ancestors' graves in their hometowns and pay their respects on the day of Qingming, which falls on April 4 this year.

Also sparking public concerns are traffic jams and environmental costs caused by the surge of travelers for tomb sweeping as well as fire hazards brought by practices including burning incense and setting off firecrackers as part of a typical ritual.

These problems have sent people to explore more cost-effective and environmentally friendly manners to express love and reverence to their departed family members and ancestors.

Many cemetery parks across China like Fushouyuan launched online reservation platforms for the service of tomb sweeping by proxy. The platform allows users to text messages, upload photos and short videos featuring the departed and offer virtual sacrifices as new ways to express reverence, according to Zhao Yu.

"We saw nearly 100,000 users visit our platform in a week after it was launched," Zhao said.

Local authorities for civil affairs also gave support to such platforms. In Zhuhai, south China's Guangdong Province, a reservation function for the service was embedded in the WeChat account of the local civil affairs department, and an operating guide was released on various platforms to encourage the public to choose the service.

In Zhao's eyes, the ongoing epidemic presents an opportunity for online tomb sweeping and green funerals to gain wider recognition. Zhao believes that the traditional funeral service will be transformed as new media technologies make interaction possible at every stage.

"In essence, wherever we are, what matters is our love and reverence for our ancestors and the departed," said Zhang Jingxue.