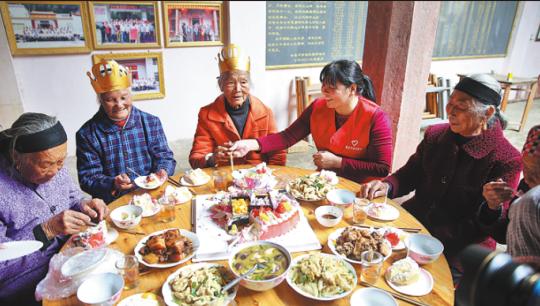 In an ancestral hall in Xiaying, a village in Jiangxi province, Wang Shengdi, 83, and Li Fengying, 81, blew out the candles on a cake together to celebrate their December birthdays.

"The birthday celebration brings me back to the good times of my wedding," Wang said with a laugh. "I would have been much happier if I'd had the house I'm living in now."

They shared the cake and the moment of memory along with more than 60 other village seniors at a free lunch banquet on Dec 16. The lunches, in what's been dubbed the "filial love canteen", have been offered to all residents over age 80 three times a month since May 2018. They provide an opportunity for them to talk and for village officials to brief them on the latest government policies.

"In the past, as we struggled to feed ourselves, we would never have thought of organizing such activities," said Wang Xingjun, 45, Party secretary of the village.

Thanks to the government's poverty alleviation efforts, residents now do not have to worry about basic sustenance. The village has developed some projects in agriculture and rural tourism that have helped fund the canteen.

"We want to make all the elderly people as comfortable as possible so they can fully enjoy it," Wang said. "Many of them celebrated a birthday for the first time in their lives at the free lunches."

Xiaying, with a population of 3,883, is in Huichang county, which was delisted as a national-level poverty-stricken county on April 28. The incidence of poverty dropped to 0.17 percent in 2019 from 22 percent in 2013, the county government reported.

The Chinese government has pledged that all rural residents living below the current poverty line will be lifted out of poverty by the end of this year. The goal by year's end is that no county in the country will have extreme poverty.

"The year 2020 is crucial in winning the anti-poverty battle," President Xi Jinping said in his New Year's speech on Tuesday. "The clarion has sounded. We must work together and work hard … to secure a victory in the battle against poverty."

In addition to offering local residents better healthcare and social security services, the infrastructure and environment of Xiaying have significantly improved over the past few years.

The country's poverty alleviation efforts since 2013 have set strict standards on infrastructure construction, such as better local roads and houses.

Wang Shengdi, 83, had her house rebuilt to meet the national standards. The road to it was also paved so her family can easily park agricultural vehicles at their doorstep. Management of the waste disposal system in Xiaying has also been improved to create a pleasant living environment.

"I was born in the village, and I've never seen so many changes in such a short period of time in its infrastructure, administration and living environment," said Wang Xingjun, the village official. "Can you imagine that the residents had been used to seeing rats frequently running on the road?"

He said poverty alleviation efforts have laid a solid foundation for the revitalization of the village, and developing suitable industries to bring people more income is the key to preventing them from slipping back into poverty if the specialized support from higher-level governments weakens in the future.

"More than 100 residents who had been working in cities have returned since 2017 because they've noticed they can have quality lives in rural areas just like in the cities," he said.

The village offers opportunities for development as well. With interest-free loans from State-owned financial institutions, the villagers can choose to grow profitable agricultural products such as navel oranges, for example.

In the past year, Xiaying has been encouraging residents to set up greenhouses to grow baby pumpkins, which are lucrative and becoming increasingly popular with people in urban areas who are keen on living a healthy life-style. The cost of building the greenhouses is shouldered by the government or companies that come for the opportunities, Wang Xingjun said.

"Since different industries have begun to thrive here, people can now make a good living or find employment at their doorstep," he said.

Under the National Rural Revitalization Strategic Plan (2018-22), establishing industries in villages is key to the sustainable development of rural China and to ensuring people won't fall back into poverty.

Rural revitalization is expected to have made major progress by 2035, when residents should find quality employment and the relative poverty gap will have been narrowed. By 2050, China's villages will become beautiful places to live as the agricultural industry booms. What's more, the residents will become prosperous, the plan said.

Zengfeng, another village in Huichang county, was stripped of the poverty label in 2017 and is trying to build itself into a model community.

The entrance to the village is clearly marked and beautifully designed. The quality main road passing farms of navel oranges and lotus flowers leads people into the heart of the village. Residents can find the ancestral hall, medical center, kindergarten, supermarket, village square and e-commerce station at the center of the village. At the west end, an agri-tourism center is being built at the foot of the mountain.

"The village has become more and more appealing," said Zeng Jianming, Zengfeng's Party secretary. "After seeing the transformation, some residents who are migrant workers said they want to return and invest in agricultural businesses with the money they saved."

It's not only residents who want to return. Businesses are also coming in. Meng Xiangning, manager of a small salmon farm in the village, said that good air and water quality are key factors that drew the Beijing-based company to Zengfeng in 2018.

"We wouldn't have set up the farm if the roads had remained poor. We need to ensure the salmon reaches the market fast and fresh," said Meng, who provides jobs for some residents.

Improved infrastructure and residents with higher incomes have also lead to a boom in e-commerce in Huichang, said He Ying, manager of the Huichang branch of JD.com, one of China's e-commerce giants.

He said he returned to his home in Huichang in 2016 from Shenzhen after seeing potential for the e-commerce business in rural areas.

At peak times this winter, the branch handles 22,000 agricultural product packages per day and sends them all across the country. As the residents have more money to spend, the branch delivers about 400 packages daily to different townships in Huichang, up from about 20 in 2016, He said.

Also, thanks to the improved roads, the company can deliver parcels from residents' houses instead of collecting them or leaving them at a collection point in the township.

"We can enjoy quality air, fresh produce and quality services in all respects," He said. "It won't be long before urban dwellers start to envy the life of the rural residents."