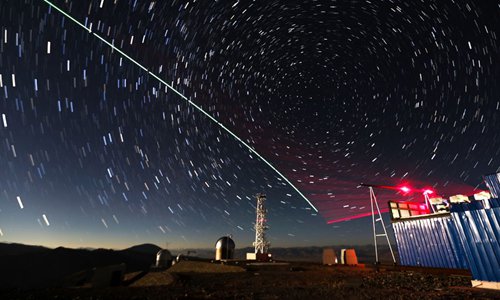 China's Quantum Experiments at Space Scale, or better known as the Micius, have successfully conducted an eight-minute-long encrypted data transmission with a mobile ground station, marking a world's first.

A Global Times reporter learned from the project research team on Wednesday that the successful space-ground quantum communication experiment was conducted around midnight on Monday in Jinan, East China's Shandong Province. The project is led by Pan Jianwei, a quantum physicist from the University of Science and Technology of China (UTSC).

The mobile quantum satellite ground station weighing slightly over 80 kilograms and the size of a paint bucket, was jointly developed by the UTSC, QuantumC Tek, a leading manufacturer and provider of QIT-enabled ICT security products and services and the Jinan Institute of Quantum Technology. It is the first of its kind in the world.

Pan's team said the development of the ground station started in 2019, and was completed on December 24. The successful communication with the Micius satellite marked the completion of construction of China's first mobile quantum satellite ground station.

The transmission lasted some eight minutes, and a great amount of encrypted information was sent to the ground station, the team said.

The previous ground station for the Micius satellite weighed more than 10 tons. Developers conducted hundreds of experiments in order to miniaturize the ground station.

The mobile version of the ground station can be installed on a vehicle, work anytime and anywhere, and its significantly reduced manufacturing cost paves the way for mass production in the future, the team said.

The project includes verifications and equipment based on key technologies used in long-distance quantum communications.