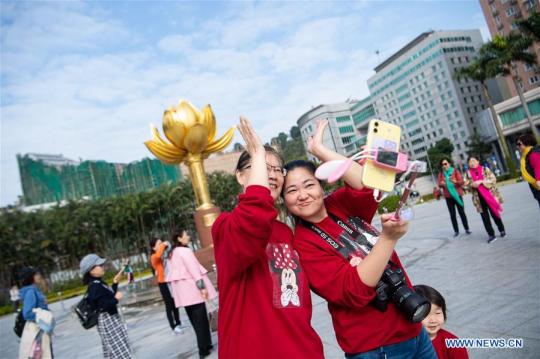 After witnessing rapid development since the 1999 handover, Macao can find new growth engines and achieve its goal of moderate economic diversification under the Guangdong-Hong Kong-Macao Greater Bay Area framework, according to experts.

In 2016, the Macao Special Administrative Region rolled out its first five-year development plan, with the aim of reducing reliance on the gaming industry and diversifying the economy.

"In the past, Macao's (economic) development had largely relied on the gaming sector ... but this sector will reach its limit (eventually)," Ding said.

Last year, gross value added of all economic activities in Macao grew by 39.52 billion patacas ($4.9 billion), a year-on-year rise of 9.9 percent, according to a report this month by the city's Statistics and Census Bureau.

Ding said the Greater Bay Area can not only provide rich resources in talent and physical space, but also huge market demand for Macao, a city with a population of more than 670,000, to develop its financial sector.

Chibo Tang, partner at venture capital company Gobi Partners in Shanghai, said he is positive about Macao's technological development as a way to diversify its economy, especially as the sector can play a role in the city's robust entertainment and gaming industry.

Tang said that when the technology and startup ecosystem in Macao was compared with other places in the Greater Bay Area, such as Hong Kong and Shenzhen, he thought it was "fairly clear" that Macao still lagged behind, adding that whatever was lacking represented a "great opportunity."

"There is opportunity for entrepreneurs to set down roots here in Macao, work on new business models, work on innovations and apply technology to areas that previously no one has thought about," Tang said. He added that Gobi Partners is planning to set up a fund in Macao to invest in early-stage startups, which he hopes will be launched soon.

"The reason we need to bring more arts and cultural aspects into our future development is because we also need to find ways to create sustainable development, and we need to build an extension into the other complementary industry sectors," Ho said.