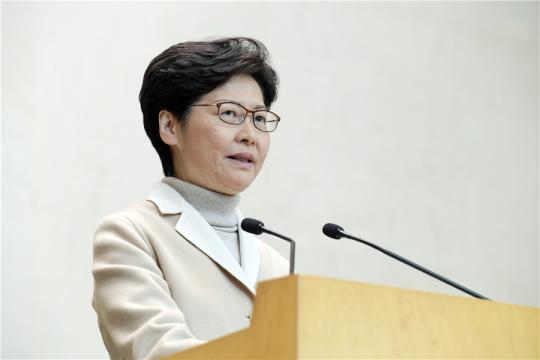 Speaking to the media before a weekly Executive Council meeting, Lam said on Tuesday the broad participation of students in months of unrest has been very alarming and worrying as students arrested over the past six months came from more than 300 schools.

Also on Monday, six students and a teacher were arrested in Sheung Shui, New Territories, on suspicion of plotting to block roads with barricades, according to police.

Lam has asked Secretary for Education Kevin Yeung to seriously follow up on cases involving teachers currently under arrest. She also called on schools to continue to prevent students from engaging in unlawful activities and to keep them away from violence.

Of the 6,022 people arrested since June, 40 percent were students, police said on Monday.

The city's Education Bureau required local schools last month to discipline those students who took part in unlawful activities such as disrupting subway trains and blocked major roads, leading to a weeklong suspension of classes at primary and secondary schools.

This is the first time homemade bombs were found at a secondary school since the extradition bill incident started in June. The remote-controlled bombs, found on the campus of Wah Yan College, a secondary school in Wan Chai, Hong Kong Island, were subsequently defused by the Hong Kong police on Monday evening.

"Both of these devices have only one function, to kill and to maim people, given the quantities of the explosives and fragmentation material," Alick McWhirter, a specialist superintendent in the Hong Kong Police Explosive Ordnance Disposal Bureau, said at a media briefing on Monday. The bombs contained a total of about 10 kilograms of high explosives and fragmentation material, according to McWhirter. The radio-controlled devices were "fully functional and ready to be used", he said, adding that the bombs' range was between 50 and 100 meters.

Li said making or possessing explosives is a serious crime subject to up to 14 years imprisonment. Anyone using any explosive substance to cause an explosion likely to endanger life or cause serious injury to property is liable to life imprisonment, he warned.

Wah Yan College resumed classes on Tuesday after police thoroughly inspected the campus and confirmed it was safe and secure. The school issued a statement expressing gratitude to the police for keeping the campus safe and pledged to fully cooperate with police in their investigation.

Lam also dismissed rumors Tuesday that local officials would be reshuffled, saying restoring law and order and promoting the city's economic and social development were her immediate priorities.