Macao legislation has come a long way since 1999 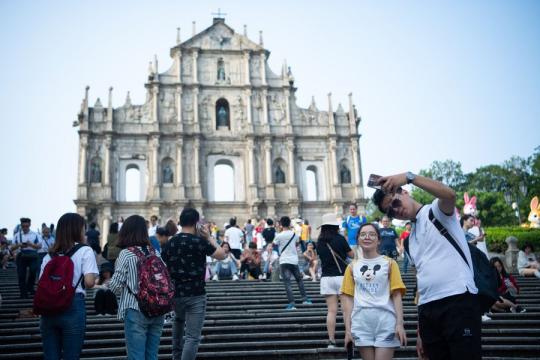 Macao has seen great achievements in legislation, especially those covering national security and people's livelihood, since it returned to the motherland two decades ago.

Since 1999, when China resumed sovereignty over Macao, the special administrative region has accelerated its legislative pace under the Macao SAR Basic Law. The region has created and adopted 290 laws and 628 administrative regulations as of November, according to the Legal Affairs Bureau of the SAR government.

While the laws and rules have contributed to promoting the regional economy and optimizing livelihoods, they have also played a big role in promoting socially sustainable development, said Liu Dexue, director of the bureau.

To implement Article 23 of the Basic Law and ensure the stability of the region, for example, the SAR made a law in 2009 prohibiting behavior that negatively affects the country's safety, he said.

Further, in response to Macao residents' domestic violence complaints, the SAR passed a law in 2016 to increase efforts to curb such violence and offer legal aid to victims, he said.

Also that year, Macao amended the law on the illegal production, purchase and use of narcotics and psychoactive substances to give harsher penalties against drug dealers and users and boost efforts to keep juveniles from using drugs, Liu said.

"All the moves are meant to uphold the policy of 'one country, two systems', and to strictly carry out the Basic Law," he added.

Kou Hoi-in, president of the SAR's Legislative Assembly, highlighted the increasingly significant role of legislative affairs in the past 20 years since Macao's return, adding that security-related legislation has also been extended to cyberspace.

"Before Macao returned to the motherland, its economy had struggled for years," said Kou, who is also a deputy to China's National People's Congress. "So since we came back, we've given more attention to two major issues－economic improvement and livelihood promotion－to ensure regional stability.

"We set up a social security network by legislation to make sure laborers, low-income groups, the disabled and senior citizens can all be given basic guarantees. We also made laws on housing, food safety and transport to solve residents' difficulties."

He noted the priority of the SAR's legislation is to promote China's Constitution and the Basic Law to further uphold the "one country, two systems" principle.

"Meanwhile, we'll take part in the developments of the Belt and Road Initiative and the Guangdong-Hong Kong-Macao Greater Bay Area with a more positive attitude," he added.

As legislation improved over the past 20 years, courts in Macao have increased efforts to resolve legal affairs.

Courts in Macao, an area where the major population is Chinese, for instance, have improved judicial efficiency by applying the Chinese language in more hearings and rulings, a statement of the Macao Court of Final Appeal said, adding that the promotion of bilingual judges－Chinese and Portuguese－in Macao is necessary and also contributes to ensuring quality of case hearings.

The statement added that judicial communication and training between Macao and the mainland have also increased since Macao's return, helping Macao judges better understand Chinese history, culture as well as China's Constitution.