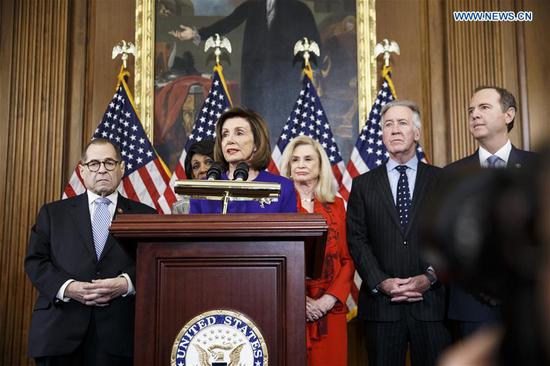 U.S. House Democrats on Tuesday moved forward by announcing two articles of impeachment, accusing U.S. President Donald Trump of abuse of power and obstruction of Congress, culminating over two months of investigation by Democrat-led House committees into the president's dealings with Ukraine.

The president's pressure campaign on Ukraine "compromised our national security and threatened the integrity of our elections," Nadler said, "Throughout this inquiry, he has attempted to conceal the evidence from Congress and from the American people."

"We must take this solemn step today," Nadler said.

"To Impeach a President who has proven through results, including producing perhaps the strongest economy in our country's history, to have one of the most successful presidencies ever, and most importantly, who has done NOTHING wrong, is sheer Political Madness! #2020Election," Trump tweeted Tuesday morning.

In a series of tweets followed, the president again slammed the impeachment process as a "witch hunt."

"The president's continuing abuse of power has left us no choice," said Schiff.

The House Judiciary Committee, which is responsible for writing articles of impeachment, is expected to vote on the articles on Thursday and a full House vote will take place next week, multiple local media outlets predicted.

Trump will be impeached if the House approves any of the articles of impeachment the House Judiciary Committee has recommended by a simple majority vote.

The panel's ranking member, Republican representative Doug Collins, said he expected the Democrat-controlled House would pass the articles of impeachment before Christmas.

"It's a clock-and-calendar issue, and every American ought to be scared about this," Collins said on Fox News on Tuesday.

The House Judiciary Committee released a report on Saturday explaining the constitutional grounds for the impeachment, accusing Trump of abusing his office by pressuring Ukrainian President Volodymyr Zelensky into launching investigations that could benefit Trump politically during the 2020 U.S. elections.

Trump is the fourth U.S. president in American history to face impeachment. If impeached, he will be the third U.S. president to face a trial in the Senate.

However, conviction can only happen in the Senate and requires at least two-thirds of its members, or 67 senators, to vote in favor after a trial. Currently, the Senate has 53 Republicans, 45 Democrats and two independents.